This article is about the Copy Ability. For Bubbles in other contexts, see Bubble (disambiguation).

Bubble is a Copy Ability that debuted in Kirby: Squeak Squad. When Kirby gains this ability, he obtains a blue hat similar to a shower cap, topped with many bubbles spewing out of it. He also gains a bubble wand, which is used for launching bubbles. Using this ability, Kirby is able to shoot a stream of bubbles at his opponents, which transforms them into bubbles containing Copy Essences upon defeat. The stream can also be used to break away blocks and other obstacles, even being able to shoot through walls. 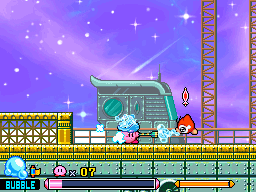 Bubble debuts in Kirby: Squeak Squad. It allows Kirby to transform regular enemies into bubbles so that he can pick up their Copy Abilities and use them later. For example, if Kirby uses the bubble ability on Sir Kibble, the bubble for the Cutter ability appears after Sir Kibble is defeated. If Kirby uses the bubble ability on an enemy that does not give a Copy Ability, such as Waddle Dee, a small star appears instead.

If the ability is used on a Gold Waddle Dee, the bubble will contain both a star and a chest, despite them not normally combining.

Bubble Kirby makes a small cameo appearance in this game as one of the collectible Keychains that can be found throughout it.