Both of them collectively serve as the fourth instalment in the Super Smash Bros. series, platformer-fighting games where the goal is to knock opponents off the stage. The franchise features characters from various video game franchises as playable fighters, with this instalment involving three characters from the Kirby series. On December 7th, 2018, a sequel was released for Nintendo Switch, called Super Smash Bros. Ultimate. 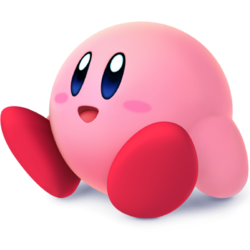 Kirby is one of the starter characters in this game. He is notable for his small stature, light weight, and multiple mid-air jumps. His versatility makes him good for beginners, and he can copy the neutral special moves of all the other fighters.

Most of Kirby's attacks were retained from his appearance in Brawl with few tweaks, with many of those being based on moves from the Kirby series. Kirby's attacks are as follows:

Kirby is currently ranked 47th on the Super Smash Bros. for Nintendo 3DS/Wii U tier list, in E rank. In addition to having great difficulty approaching his foes (especially those who rely on projectiles), Kirby's light weight and slow falling speed make him prone to being juggled, and his recovery easy to intercept. While Kirby hasn't fundamentally changed from Brawl and in fact has many attributes strengthened, his buffs do not compare to the improvements most other fighters were given, resulting in a weaker position relative to the rest of the cast. Kirby can be used successfully in tournaments, but this is very difficult to pull off. 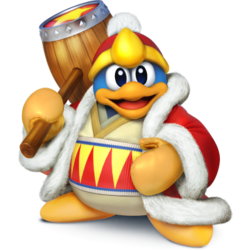 King Dedede is one of the starter characters in this game. He is a very heavy fighter, with slow but strong attacks. Despite his size, King Dedede has a very high recovery, with 4 mid-air jumps and his Super Dedede Jump to pick up the slack.

On the tier list, King Dedede is ranked 52nd out of 55 characters, in the G tier. Dedede received the second-largest drop on the tier list (behind Falco). Dedede's notable strengths are that he is very hard to KO, he has a very large disjointed range because of his hammer, good edgeguarding moves in his back and down aerials, good punishing moves courtesy of his forward and down smashes, and the aforementioned back and down aerials.

Despite this, Dedede suffers from the removal of chain grabbing, his back aerial going through a complete overhaul, which weakened it, getting a slower airspeed from Brawl, in addition to already being a slow walker and dasher. His new side special, Gordo Throw, is capable of being reflected by any attack that deals at least 2%, meaning that it can be countered by most jabs, in addition to Waddle Doos, which used to shoot a beam, being removed, makes his side special weak. He also has some of the slowest frame data of all the characters in the game, with only a few attacks coming out before frame 9, which, when coupled with his large stature great weight, and high falling speed, gives Dedede one of the worst defensive and offensive options in the game. Last, his disproportionately weak strength is laughable, as his fastest moves are unable to KO until very high percentages, and his strongest attacks come out very slowly, making them very easy to punish. Overall, his tournament results, which in contradiction to his Brawl tournament placings, are poor, although the European tournaments have Dedede mains placing somewhat better. King Dedede still maintains a decent amount of players dedicated to him, meaning that good advancements in his playing game have been introduced, although he is mainly considered unviable by most of the Smash community, and is claimed to be either one of the worst Super Smash Bros. characters by some, or, in a few cases, the worst of them all. 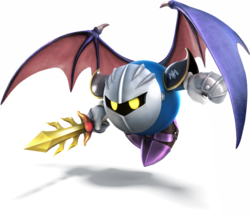 Meta Knight is one of the starter characters in this game. He is characterized by his outstanding mobility and the quickness of his attacks, making him a formidable fighter. His recovery is particularly good, with 5 mid-air jumps and a great range of moves that allow him to recover, in one form or another.

Meta Knight is currently ranked 14th on the Super Smash Bros. for Nintendo 3DS/Wii U tier list, in B rank. Although he was considerably nerfed from the previous game, causing a drop from his placement as 1st in the Brawl tier list, he is still regarded as a fairly decent fighter. The most noticeable changes are the removal of his ability to glide in the air, along with his long-distance recovery being toned down, which makes him more vulnerable while offstage. On the other hand, his exceptional mobility has been buffed by making his quick attacks and airspeed even faster, which is one of the reasons he still is relatively used in the competitive scene, albeit mostly as a counterpick and rarely as a player's main, unlike his Brawl incarnation.

Super Smash Bros. for Nintendo 3DS features 42 stages - some of which are carry-overs from previous games. Some were later made available as paid downloadable content. They are as follows:

Super Smash Bros. for Wii U features 55 stages - some of which are carry-overs from previous games. Some were later made available as paid downloadable content. They are as follows:

Between both versions, there are four stages based on Kirby games.

Dream Land is available only in the 3DS version. It is a scrolling stage, in which all areas from Kirby's Dream Land are displayed on a Game Boy screen, complete with battery light and a monochromatic color palette. The stage begins in Green Greens and then switches between Castle Lololo, Float Islands, Bubbly Clouds, and Mt. Dedede in no particular order. The areas' respective music themes play as they appear on-screen if the default music track is chosen for the stage.

The Great Cave Offensive is available only in the Wii U version. It is an enormous stage inspired by the sub-game with the same name from Kirby Super Star and Kirby Super Star Ultra, and consists of a maze loosely divided in four sections. The upper section is based on the Sub-Tree area, the bottom-right section is based on Crystal area, the bottom-middle section is based on the Old Tower, and the bottom-left section is based on the Garden area. The whole stage is filled with hazards, most notably "Danger Zones" made of lava, which will KO any fighter that touches them while having over 100% accumulated damage. Other hazards include spikes (which will hurt a fighter upon contact), minecarts (which the player can ride to roll over other fighters), and two rotating cannons. This is one of the two biggest stages in the game and is specifically designed for the 8-Player Smash multiplayer mode.

Halberd is available only in the Wii U version, being previously featured as a stage from Super Smash Bros. Brawl. It takes place on and around the Battleship Halberd from Kirby Super Star. The stage begins in a docking area, then takes place on a floating platform that follows the Halberd about. Then it docks on the deck of the Halberd, where the fighters can be subject to the attacks of the Combo Cannon. This includes the giant main laser gun, explosive cannonballs, and an extending arm that might strike a random fighter.

Dream Land (64) is available in both versions as downloadable content, being previously featured as a stage from the original Super Smash Bros. game. The level consists of three floating platforms above a bigger main one, and Whispy Woods as a hazard, blowing gusts of wind that push fighters. Bronto Burts can be seen flying in the background occasionally, while King Dedede can also appear if he's not participating as a fighter. The default music track is a remix of Gourmet Race from Kirby Super Star.

Some enemies from the Kirby series appear in the Nintendo 3DS version's Smash Run game mode, dropping stat-boosts upon defeat for the player to collect over a large stage. These are:

Smash Run itself was heavily inspired by the City Trial game-mode from Kirby Air Ride. Both involve the playable characters rushing about a large play area to collect powerups before the time runs out, then use what they got to battle their opponents in a variety of final battles.

All items from the Kirby series were carried over from Brawl. These are:

The following characters from the Kirby series can be summoned using an Assist Trophy to aid the fighter:

Among the collectable trophies in Super Smash Bros. for Nintendo 3DS/Wii U, there are several depicting characters and objects from the Kirby series. These include:

Some elements in Super Smash Bros. for Nintendo 3DS/Wii U would go on to influence future Kirby titles: