Dark Nebula is the lord of the underworld and the final boss in Kirby: Squeak Squad. It was concealed in a treasure chest that Kirby receives after beating Daroach. However, this treasure chest was stolen by Meta Knight to make sure Dark Nebula would not be released. However, Kirby, believing that the treasure chest contains the cake he was about to eat in the beginning of the game, beats Meta Knight and the treasure chest is then stolen by the Squeaks. As a consequence of this, Dark Nebula is released from its prison, consuming Daroach. After Kirby defeats Daroach a second time, Dark Nebula exits Daroach's body as a small dark star bearing its normal form's color which Kirby follows and then faces it, where it enlarges and gains an eye. After Kirby beats it, the stars that make up Dark Nebula fall out of it, leaving only its eye, which then explodes. Having defeated Dark Nebula, Kirby returns home.

Dark Nebula has, to this point, only appeared once in the series as a proper entity. It has been given some representation in subsequent titles in the form of illustrations, references, and other memorabilia, however.

Dark Nebula is a large black star. It has one large eye, that being found in its center. Its color changes with its form during battle, with a red color for fire, light blue for ice, and green for electric. Dark Nebula does not have any attacks in its default black form. 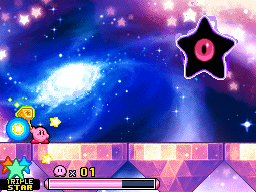 Dark Nebula is the final boss of Kirby: Squeak Squad. It has the ability to change into three different forms, each of which have different attacks. 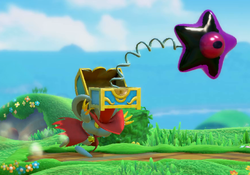 Daroach using "Smack-in-the-Box" in Kirby Star Allies, which is a callback to Dark Nebula.

Dark Nebula appears in the Celebration Picture titled "Bad Boss Brothers", though it is facing away from the frame in the picture. Additionally, a mock-form of Dark Nebula appears as part of Daroach's move-set, in the move "Smack-in-the-Box". Furthermore, it also appears as an illustration by Daroach in his Guest Star ???? Star Allies Go! picture. Finally, it appears inside a chest in one of the Stone transformations.

In Super Kirby Clash, a collectible sticker can be purchased which resembles Dark Nebula. It comes with the caption "*staaare*" and an ominous sound effect.

In Kirby's Dream Buffet, Dark Nebula makes an appearance as a Character Treat, using his artwork from Kirby: Squeak Squad.

It is widely believed by fans of the Kirby series that Dark Nebula is another form of Dark Matter, similar to Zero. While no specific line of text in English localizations connects Dark Nebula to Dark Matter in this way, its Japanese, Chinese and Korean name of Dark Zero implies a relation, as well as its ability to possess other characters and its appearance. Such similarities are noted in a snippet from the Japanese 20th Anniversary Kirby Pupupu Encyclopedia, page 21, lumping Dark Nebula in with Dark Matter-based characters, however it says that the relationship between Dark Nebula and Dark Matter is not clear. As such, there is no definitive proof of said relationship.