Gaw Gaw is an uncommon enemy from Kirby: Squeak Squad. Resembling a small mole-like creature with a face similar to a mustelid, it hops around in varying patterns, and some attempt to lunge at Kirby. Swallowing it yields the Animal ability.

Gaw Gaw makes its first and only appearance as an enemy in this game. It is usually found in or near patches of dirt which can be dug through using the Animal ability. When not holding in place, it is capable of using its claws to scratch and can also do a lunge attack. Gaw Gaw is also capable of holding onto walls and lunging from them. Despite these traits, Gaw Gaw is not usually quick enough to pose a threat to Kirby.

When possessed by Ghost Kirby, Gaw Gaw can be made to jump and swipe its claws in four different directions, allowing it to dig through dirt like Animal Kirby can. However, it has difficulty digging upward past a certain point. It can also be made to cling to walls, and can then do a leaping attack from them. Oddly, it cannot be made to lunge while on the ground. 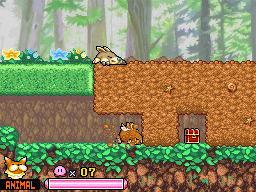 Gaw Gaw can be found in the following levels and stages:

Gaw Gaw appears as a randomly-obtained Keychain in this game. It is depicted in its sprite form from Kirby: Squeak Squad.