Kirby: Squeak Squad, known as Kirby: Mouse Attack in British English, also sometimes spelled without a colon, is a main-series Kirby game for the Nintendo DS released in 2006, developed by Flagship and Natsume, and published by HAL Laboratory and Nintendo. This game uses the same base graphical style as preceding games Kirby: Nightmare in Dream Land and Kirby & The Amazing Mirror, though several new sprites for Kirby and other characters are present, and the game engine has been updated, providing smoother gameplay. Being on the Nintendo DS, a number of stylus-based features are included, mainly in the form of the bubbles and the Copy Palette, which gives Kirby a sort of inventory that he can use to store Treasure Chests and other items. The game features a main story mode and four Sub-Games, with one of them being hidden at the beginning. Another feature is the Collection Room, where the player can change Kirby's color, listen to music, and view collected items. 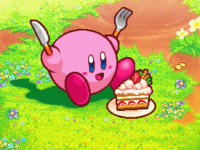 A scene of Kirby about to eat his cake

The story of Kirby: Squeak Squad takes a bit more of a lighthearted and comedic approach than is normal for Kirby games, but the overall story arc is nonetheless familiar. It begins on a tranquil day in Dream Land, where Kirby is seen about to have a snack out in the middle of a green field. His treat is a piece of lavishly-decorated Strawberry Shortcake, which the narration takes great pain to point out is Kirby's obsession, particularly as the cake is snatched away from the hungry puffball's plate by an unseen thief before he can eat it. It takes a moment for Kirby to realize his precious cake has been taken from him, but once he does, he immediately assumes that King Dedede is responsible (since it wouldn't be the first time), and heads off to Castle Dedede to teach the greedy King a lesson. 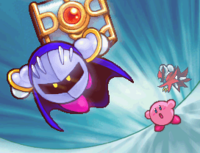 On his way to the castle, Kirby runs repeatedly into a strange new band of thieving rodents known as the Squeaks, and battles them for control of the treasure chests he finds. When he finally gets to the castle and trounces King Dedede, he realizes a little too late that Dedede was not responsible for taking Kirby's cake, and when the real thieves show up to steal more stuff, Dedede picks Kirby up and tosses him at them, causing the lot to fall into a deep hole leading to Nature Notch. From here, Kirby chases after the Squeaks and their leader Daroach to try and find the treasure chest that contains his cake. After chasing and battling them through several worlds, Kirby faces off against Daroach directly in Ice Island and defeats him, but before he can get his stubby hands on the chest that Daroach was personally keeping, Meta Knight appears and takes the chest for himself. Thinking this chest must be the one with his cake, Kirby runs after Meta Knight and defeats him in the recently-rebuilt Halberd as it takes off out of Secret Sea.

With Meta Knight defeated, Kirby approaches the chest, but it is taken from him again, this time by Daroach. Daroach wastes no further time and opens it, only to be swallowed in a cloud of black fog emanating from the chest. It turns out the chest contained an ancient evil known as Dark Nebula, and Meta Knight was trying to safeguard it from Kirby and Daroach. Now that Daroach has been possessed by this villain, Kirby must battle him to knock it out, and then use Daroach's Triple Star cane to chase the fleeing Dark Nebula through an asteroid field out in Gamble Galaxy and face down this threat. After defeating the monster in its true form, Kirby is free to return home, but he regrets having not found his cake along the way. However, a short time later, the Squeaks - grateful for Kirby's actions freeing Daroach and apologetic for the trouble they caused - return Kirby's cake to him, and the pink puffball is truly happy at last. 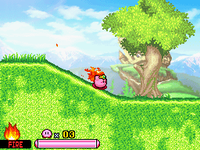 Due to being a main-series title, Kirby: Squeak Squad plays much like a standard Kirby game, with the main objective as always being to travel through stages containing various enemies and obstacles to reach the end or defeat a boss. Kirby has access to all of his standard moves and abilities, including his hover, inhale, slide, and air bullet, among others. He also makes use of his Copy Ability as usual by inhaling certain enemies or collecting Copy Essences inside bubbles. This game features many of Kirby's classic abilities, but five in particular are new to this game: Animal, Bubble, Metal, Ghost, and Triple Star, with Ghost being a secret unlockable ability and Triple Star being the Last Battle Ability which Kirby uses to fight the main villain at the end.

Despite it being very similar to the preceding games Kirby: Nightmare in Dream Land and Kirby & The Amazing Mirror and borrowing many elements from those games, Kirby: Squeak Squad has a large number of distinct innovations and features, some of which have not been seen since. The most distinct feature makes use of the Nintendo DS stylus and lower screen, and is referred to as the Copy Palette. This feature allows Kirby to store up to five items inside his stomach, which are contained within bubbles. At any time while playing a stage, Kirby can spit out one of these bubbles or use it by having the player tap the bubbled item with the stylus. Certain bubbled items can also be combined together inside the Copy Palette for various effects. The most important use of this feature is for Kirby to carry the treasure chests he finds within stages to the goal, as these treasure chests are the main collectable of the game, and contain bonus features for viewing in the Collection Room, Ability Scrolls which can upgrade Kirby's Copy Abilities, key items for advancing the story, and other things.

Kirby: Squeak Squad also has a number of general improvements and additions to the gameplay and stage content. The game's engine allows for much tighter controls than earlier games and also allows Kirby to make greater use of his momentum when performing certain actions, making his movement overall feel smoother. There are also a wider array of stage devices and hazards, such as foliage that can be cut or burned to reveal secrets, water that can be frozen using Ice to walk on the surface, and metal surfaces that can have electric currents run through them using an electric attack like Spark. Many returning abilities are given additional attack options as well, with the most notable example being the Magic ability. Lastly, certain abilities can have attributes combined, such as imbuing the Sword ability with fire; a feature that would not return to the series until Kirby Star Allies.

Like in the previous Kirby games, enemies are present to hinder Kirby's progress or to provide him with a copy ability. Most enemies respawn after Kirby walks a certain distance away from their spawn point.

These enemies do not provide Kirby with any Copy Ability.

These enemies provide Kirby with a Copy Ability if Kirby inhales them.

When progressing through the game, Kirby can fight mid-bosses. Kirby can defeat them by attacking them with his Copy Ability or by spitting projectiles back at them. After Kirby defeats the Mid-Bosses, he can take their ability by sucking them in or he can attack them, making them explode.

If Kirby obtains a big treasure chest, the Squeaks appear. They can take the treasure chest and then go to their hideout. If Kirby does not enter their base in time, it closes down.

The Squeakers act like normal enemies. However, when they are defeated, they may release food. They are also capable of taking treasure chests, especially when no other Squeaks are around.

If Kirby enters their base with no Squeaks present, the inside may be a room containing a few items or some Squeakers. However, once he exits outside the base, they reappear.

Kirby: Squeak Squad's bosses, unlike in Kirby & The Amazing Mirror are fought in order, at the end of each level. Before each boss fight, Kirby can receive an ability bubble or another item in a bubble for the fight. Unlike mid-bosses, bosses do not yield an ability upon defeat. After Kirby defeats the boss, a large treasure chest appears. Inside it, Kirby can receive a boss medal. If Kirby collects all boss medals, he can play the sub-game, Boss Endurance.

The following is a list of staff who have worked on Kirby: Squeak Squad:

An unused design for a Copy Ability exists in the game's files called 'Block'. When Kirby has this ability, he gains a hat similar to that of Mirror from Kirby Super Star and gains a staff similar in look to the Triple Star cane. It is unclear how this ability would have functioned.

A couple of Copy Palette skins and item icons were left unused.

There is an unused red variant of Squeaker who seems to have the same abilities as the blue one. 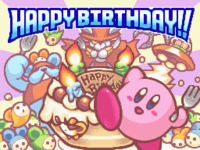