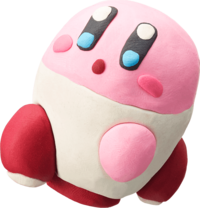 Artwork of the Kirby Rocket

The Kirby Rocket is a transformation that Kirby can undergo in Kirby and the Rainbow Curse. It transforms him into a cylindrical rocket with a white body and red thrusters. In this form, Kirby flies freely through the air and automatically defeats most enemies he crashes into. He can be guided using the Rainbow Rope, and controls similarly to the Missile Copy Ability in Kirby: Canvas Curse. The Kirby Rocket is used in the stages Kirby Rocket's Big Blastoff, Back to the Battleship, and The Final Battle. Kirby Rocket also appears in several stages in Challenge Mode.

While in rocket form, Kirby will fly straight in any direction, unaffected by gravity, though he will need to be guided using the Rainbow Rope. Kirby Rocket will automatically bounce off of walls in a similar manner to a Star Dash, and will defeat most enemies that Kirby runs directly into, though he can still take damage from projectiles and enemies like Gordo. Using a Star Dash allows him to speed up significantly and plow through metal blocks unabated.

Unlike the other Kirby transformations, any Waddle Dees present do not join Kirby directly. Instead, they can help give the Kirby Rocket a boost when the players controlling them mash directional inputs.

Kirby briefly resembles Coo while being turned into the Kirby Rocket.