Artwork of Kirby in Guard from Kirby Super Star Ultra.

This article is about the technique. For the enemy from Kirby Star Allies, see Guard (enemy).

Guard is Kirby's primary defensive action that appeared in many games. By holding down the appropriate button, Kirby assumes a defensive posture until the button is released. While guarding, Kirby takes no damage from weak attacks and minimal damage from most stronger attacks, in addition to retaining his ability and not getting knocked off the ground. Enemies that contact a guarding Kirby also take minimal damage.

Generally, guarding is ineffective against attacks which involve grabbing. Guarding also has no effect on environmental elements such as wind or lava, and will typically not defend against the strongest boss attacks. Kirby can only guard while standing still. However, in Kirby: Triple Deluxe and beyond, if Kirby guards in midair or moves to the side while guarding, he will Dodge. 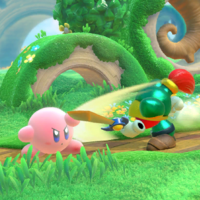 The Team Kirby Clash and Kirby Fighters games use a special version of Guard which more closely resembles the shield in the Super Smash Bros. games. In particular, with this guard, the player cannot hold it indefinitely, since a meter will decrease over time. When the meter is empty, the guarding character will be launched up then become dizzy after coming down and getting up, leaving them open to attacks from enemies or opponents for a while.

The shield mechanic in the Super Smash Bros. series is heavily based on the guard mechanic from the Kirby series, with the energy bubble very reminiscent of the Mirror ability's Reflect Guard. The primary difference is that shields shrink as they are held or take damage and will eventually break if not deactivated, stunning the user.

Eventually, this concept went full circle in Kirby: Triple Deluxe, when the ability to dodge after guarding, developed in Super Smash Bros., made its way into this game.

These Copy Abilities (and/or their respective Helpers) have their special version of guard with additional features. As a result of these particular guarding techniques, the user may be unable to dodge on the ground (or at all) when employing some of them.

There are some Copy Ability actions that provide similar functions, but are not true guards.

Some Dream Friends in Kirby Star Allies also have their own special version of guarding.

The following summarizes properties of the above-mentioned special guards.