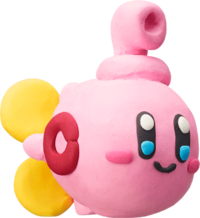 Artwork of the Kirby Submarine

This article is about the transformation in Kirby and the Rainbow Curse. For the Yarn Transformation from Kirby's Epic Yarn and Kirby's Extra Epic Yarn, see Submarine.

Kirby Submarine has greatly enhanced maneuverability in water when compared to his normal form. He holds position in the water, and will move in a straight line to wherever the player taps the stylus, as long as it is in water (waterfalls can also be traversed). If Kirby Submarine exits water, he will fall uncontrollably until landing back in it again. Unlike his normal form, Kirby Submarine ignores Rainbow Ropes, and passes right through them. He also always faces toward the right, and cannot change his facing angle.

Kirby Submarine regularly fire sets of three torpedoes without any input, shooting them out of his mouth. These torpedoes will travel through the water in a straight line until they hit an object, from there exploding. The rainbow rope can be used to guide the trajectory of torpedoes. They will automatically stick to the line and follow it until its end, from there flying straight. This is Kirby Submarine's only method of firing in different directions. When 100 Point Stars are collected, Kirby can charge up to release a powerful Star Torpedo (equivalent to the regular form's Star Dash) which can pass though enemies and obstacles and break metal blocks. This torpedo will bounce off of walls, lingering for about 10 seconds before exploding.

During the Kirby Submarine sections, any Waddle Dees present will also be turned into submarines, with the same basic capabilities as the Kirby Submarine. Naturally, they will need to rely on the ropes provided by the first player to curve their missile shots.

Kirby briefly resembles Kine while being turned into the Kirby Submarine.