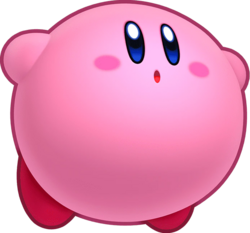 Artwork of Kirby hovering by puffing up in Kirby's Return to Dream Land Deluxe.

Hover (also referred to as Floating, Flying or Puffing Up) refers to the act of Inhaling air and moving about above the ground. This term could also be used to describe more potent forms of flight, granted by Copy Abilities such as Wing and Jet. 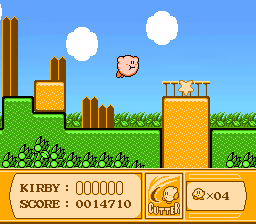 The ability to puff up and hover debuted in Kirby's Dream Land, and has recurred in every main series Kirby title. In most of these titles, Kirby can remain in the air indefinitely, until he releases an Air Bullet and falls to the ground again. While puffed up, Kirby (or King Dedede) cannot use most of his other moves, including any that involve Copy Abilities. Certain abilities that provide their own method of flight will replace this move, causing Kirby to become unable to use it while he has that ability.

Most of the time, hovering is a voluntary action that can be ended at any time. However, if a Mint Leaf is consumed, Kirby will remain in the hover state, continuously releasing air bullets until the item wears off. Kirby is not able to hover in all circumstances, however. Examples include having something in Kirby's mouth, holding an item, taking certain types of damage, or being under the effect of a certain Copy Ability (see below).

Kirby can hover as usual in Kirby 64: The Crystal Shards and Kirby and the Forgotten Land, but unlike other games in the series, he will get tired and have to come back down eventually. This is also the case for spin-off titles such as Kirby Air Ride, the Kirby Fighters games, the Team Kirby Clash games, and Kirby Battle Royale. In Kirby Battle Royale and Kirby and the Forgotten Land, Kirby can only hover up to a certain height, and can't go any higher, even if he isn't tired yet. Notably, this is not necessarily the case in the event that Kirby has fallen partway down a bottomless pit and is hovering back out. In this case, he can hover as high as he needs to in order to get out, and then higher if possible up to a limit defined by where the floor he fell from is.

Kirby is also not able to hover in all games, particularly in spin-off titles. In Kirby Mass Attack the Mini-Kirbys are unable to take in air and hover, much like Kirby under the Mini Copy Ability. In Kirby's Epic Yarn and Kirby's Extra Epic Yarn, Kirby having been transformed into a yarn outline makes him unable to take in air, and as such, he cannot hover. Kirby also generally cannot hover in games where he is primarily in ball form, such as Kirby: Canvas Curse. 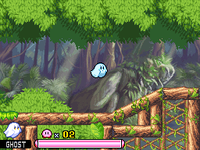 Kirby flies freely in the air while using the Ghost ability in Kirby: Squeak Squad.

The following is a list of every Copy Ability (or partner) that replaces Kirby's standard hover: 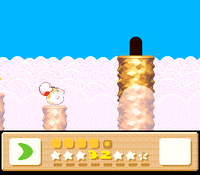 Rick the hamster is renowned for his mobility on land, but unfortunately, he cannot hover, so Kirby's options are limited while riding him. 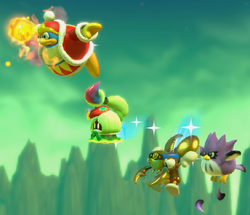 Many of Kirby's friends have their own methods of flight, as seen here in Kirby Star Allies.

Dream Friends that can Hover[edit]