Kirby Fighters 2 is a spin-off fighting game in the Kirby series, announced and released for the Nintendo Switch on September 23rd, 2020 in North America and September 24th, 2020 internationally. It is a sequel to Kirby Fighters Deluxe, which was itself an expanded version of the Kirby: Triple Deluxe Sub-Game Kirby Fighters; it is the second sequel to an expanded Sub-Game in the series, with the first being Super Kirby Clash. Kirby Fighters 2 is exclusively downloadable from the Nintendo eShop, and as such, there is no version of it on a cartridge. A physical edition was released in South Korea, but it merely contains a download code for a digital copy.

Like its previous iterations, Kirby Fighters 2 is a fighting game featuring various Copy Abilities of Kirby and - for the first time - other characters such as King Dedede, Magolor, and Gooey. The objective is to be the last fighter (or team) standing in battles that take place at various locations throughout the Kirby series and with various items. New to Kirby Fighters 2, in addition to the aforementioned new characters and Copy Abilities, is a story mode which features Kirby and a buddy of his choosing receiving a challenge from King Dedede & Meta Knight, who have teamed up in an attempt to finally defeat Kirby.

The day prior to its announcement and subsequent release, knowledge of the game's existence was accidentally leaked by Nintendo on an official website.[1]

A battle taking place in the Battle Mode, on the Dried-up Sea stage.

Kirby Fighters 2, much like its predecessor Kirby Fighters Deluxe, is a platform-fighting game where the objective is to reduce all opponents' health to zero before the same is done to the player's character (and ally, if applicable). There is a total of 22 playable characters (17 Copy Abilities of Kirby, plus five other characters referred to as "buddies"), each with different move-sets which give them various advantages and disadvantages. Aside from these move-sets and other minor differences (King Dedede's size and 15% greater health, different methods of Hovering, etc.), all characters have roughly the same attributes. In addition, all characters have access to either a Gobble or a Grab, a Guard technique, and the ability to Dodge. When fighters are defeated (and an ally is still in play) they can revive themselves as Ghosts and potentially return to the fight by attacking an enemy in this form, reviving the ghost fighter with a fraction of their original health. By default, all fighters start the battle with 200 health, though if fighters' health drops below 25%, they will take 25% less damage from all attacks to give them a better chance of recovering. The last player standing while everyone else is knocked out wins the battle; it is possible, however, for the last two combatants to be KO'd at around the same time, ending the match in a draw.[2]

Battles take place on one of 20 distinct Battle Stages which (barring some with identical layout) have varying platform layouts and stage hazards. During fights, items drop in on a regular basis which fighters can use to their advantage, whether that be recovering health with some food items, attacking enemies with items like the Crackler or Mint Leaf, or using other items to apply temporary power-ups, like the Cheer Pom-Poms or Invincible Candy. Particularly noteworthy among the items is the Team Battle-exclusive Buddy Star Blaster, which requires the two partners to work together to reassemble, and from there, blast the opposing team with a devastating attack.

New to this game is a story mode which involves King Dedede and Meta Knight challenging Kirby and a buddy to a duel atop a tall tower referred to as the Buddy Fighters Tower. This story mode takes place in five distinct chapters, which has Kirby and his selected buddy facing several battles in succession while recovering in-between and choosing items to power up along the way to the tower's "Summit". In effect, these chapters act as difficulty modes, as each one in succession features more battles and tougher boss fights.

There are a total of four distinct bosses in the story mode (five if Waning Masked Dedede & Waxing Masked Meta Knight are counted as a distinct boss), and they are re-fought multiple times with each subsequent fight being tougher and featuring new enemy moves. The bosses are as follows:

The Single-Handed Mode is a solo single-player mode that plays almost identically to the Single Player Mode in the previous two games. It most notably resembles the version in the original Kirby Fighters, as Shadow Kirby is the final boss instead of Team DDD, which is not in Kirby Fighters 2, and Kracko is not present as a boss either.

Aside from the single-player modes, the following additional options are in Kirby Fighters 2:

There is a total of 22 playable characters, consisting of 17 Copy Abilities and five other characters referred to as buddies. All Copy Abilities from Kirby Fighters Deluxe return, in addition to five new ones. 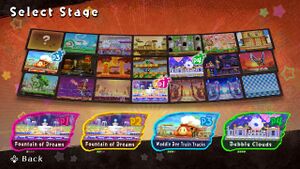 Most stages are unlocked by acquiring Fighters Points. In addition to their default songs, each stage also has an unlockable secret song, also obtained with Fighters Points. Hazards on any stage may be turned off when playing with friends online or locally, as well as offline in Battle Mode.

There is a total of 20 different stages. All stages from Kirby Fighters Deluxe return besides Flower Land, and there are also nine new stages.

Kirby Fighters 2 features 16 distinct items which can appear during battles to help/hinder the fighters. Every item from Kirby Fighters Deluxe returns besides the Team Cannon, and there are also five items new to Kirby Fighters 2. Items may be toggled on or off when playing with friends online or locally, as well as offline in Battle Mode, including options to play using only certain types of items. The following table lists each of them in alphabetical order:

(For info about Story Mode items, see this page.)

A demo of the game was released on the Nintendo eShop on October 21, 2020. The demo only allows access to Local Play, Online Play, Training, Rewards List, Options and the first chapter of Story Mode: The Destined Rivals. The player can accumulate up to 100 Fighters Points but cannot level up past Fighters Rank 1.

Only three Copy Abilities and one buddy are available to play: Sword, Bomb, Staff and Bandana Waddle Dee, and the stages that are available to play on are Green Gardens, Dried-up Sea, Springy Hand Land, and Training. As the player cannot increase their Fighters Rank and can only play Chapter 1 of Story Mode, the rest of the abilities, buddies, Rare Hats, and stages are not available.

In Local Play and Online Mode, it is not possible to create a group in the Friend Match menu, but the player can still join a group (provided that the host owns the full version of the game) and battle with other people online, regardless if they have the full version or not.

The following is a list of staff who have worked on Kirby Fighters 2: