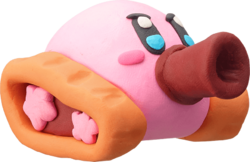 Artwork of the Kirby Tank.

This article is about the transformation in Kirby and the Rainbow Curse. For the Metamortex Transformation from Kirby's Epic Yarn and Kirby's Extra Epic Yarn, see Tankbot.

The Kirby Tank is a special transformation that Kirby can undergo in Kirby and the Rainbow Curse using Elline's painting skills. Using a canvas, she transforms him into a small tank with a cannon for a mouth and treads for feet. In this form, Kirby is able to shoot endless volleys of cannonballs from his "mouth" to quickly defeat enemies as he rolls slowly along the ground. The Kirby Tank is used in the stages Deploy the Kirby Tank! and Woodland Battle. It also appears in several Challenge Mode stages.

The Kirby Tank is about the same size as Kirby in his usual form, turning his hands and feet into orange tank treads with pink stars for gears and turning his mouth into a cannon nozzle. In this form, Kirby's controls change from the usual as follows:

In addition, Waddle Dees present gain their own cannons, which they hold above their heads along with a hard hat in place of the usual bandana. As before, they are free to walk around and jump while they are firing away.

Kirby briefly resembles Rick while being turned into the Kirby Tank.