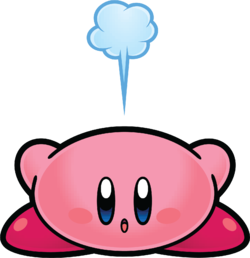 Crouch (also referred to as Squat[1], Duck and Sit[2]) refers to the action of a character lowering their posture in order to take up less space. This is done primarily in order to avoid certain attacks, to pass through thin floors, or as a prerequisite action to perform another move, such as a Slide.

Every main series Kirby game allows Kirby to crouch, which will reduce the vertical space he takes up by roughly half, allowing him to avoid projectiles such as Whispy Woods' Air Bullets. While crouching, Kirby usually cannot move. When an object is inside Kirby's mouth, crouching will cause him to swallow that object, which has various consequences based on the object swallowed, and the game the action is performed in.

With the Archer ability, crouching causes Kirby to become impervious to all attacks, in effect acting as a type of Guard. He can attack by firing arrows or crawl by holding either direction, but doing so will make him vulnerable.

Kirby is unable to crouch while he is under the effect of the Sleep, Mini, UFO or Ghost Copy Abilities. In addition, while riding a friend or piloting the Robobot Armor, his ability to crouch will be hampered somewhat. Lastly, Kirby cannot crouch if he is currently in the act of hovering or performing another move, such as a Guard.