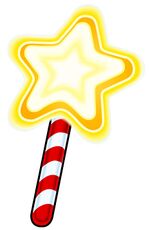 Official artwork of the Star Rod, the first and benchmark example of a Last Battle Ability

A Last Battle Ability[Japanese title] is a special ability used near the end of the game to defeat the final boss (or in some cases, the penultimate boss). The name and designation for most Last Battle Abilities comes from the Kirby Portal website, as they were not known to be officially considered such prior to then.

The following are used in "last battle" situations, but are not considered to be official Last Battle Abilities, in part because they are used elsewhere in their origin games: