A metal block,[1] once capitalized as Metal Block,[2] is a type of block which is characterized by its shiny silver appearance and its resistance to most forms of attack. First appearing in Kirby's Adventure, metal blocks are used to block off access to certain valuable items or optional areas, and require specific Copy Ability attacks or other methods to break, such as using a cannon or an explosive device. In some instances, metal blocks may be disguised as part of the terrain, as is the case in Rainbow Resort - Stage 1.

Metal blocks come in various sizes. Larger ones tend to be more resistant to attacks from Copy Abilities and other characters, functioning more like stone blocks or crystalline blocks. Metal blocks tend to be easily destroyed by Mouthful Mode abilities. 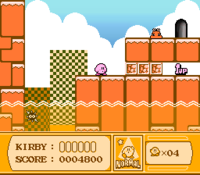 Kirby happening upon an item blocked by metal blocks in Kirby's Adventure.

Metal blocks can be found in the following games:

The following is a complete list of every known ability/method to break metal blocks in the Kirby series:

Timed Dynamite being used to break some metal blocks in Kirby: Triple Deluxe. 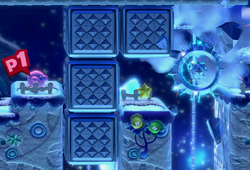 Kirby Submarine using a Star Torpedo to break some metal blocks in Kirby and the Rainbow Curse.