A screenshot of the main page

The Kirby Portal is an official Japanese website dedicated solely to Kirby and the Kirby franchise. It is owned and maintained by Warpstar, Inc., a joint venture between Nintendo and HAL Laboratory that manages the Kirby intellectual property. The site was originally created to celebrate Kirby's 25th anniversary along with a Twitter feed. After the turn of the 26th anniversary, they were both re-branded to remove the '25' motif, and have continued under general coverage of the Kirby franchise.

The website consists largely of seven main pages, all about different aspects of the franchise.

Top (トップ), is the main page, which consists of small sections pertaining to each of the other categories. These sections include a small biography on Kirby, recent news and events, recent and upcoming games, and links to pages such as the character pages and Kirby Café page. This page also has a link to a Copy Ability page that lists every Copy Ability, as well as various other special abilities from throughout the series and features various images and videos of them.

News (ニュース) is a page which contains every "news" article since the site's launch. A "news" item is usually a notification of a partnership with another company to produce Kirby-themed products, anniversaries or release of new games, occasions such as character birthdays, or new updates to the Kirby Café. Clicking on an article will open a pop-up with an image, a short description of the event, and often links to another site to purchase products.
The following pages contain all of the news items:

Character (キャラクター), is a page containing information on the four central characters of the Kirby franchise: Kirby, Waddle Dee, Meta Knight, and King Dedede. Clicking on a character will present a biography in the form of a side-scrolling artwork-filled slideshow, with small facts and tidbits about the character.

Series History (シリーズヒストリー) lists every Kirby game released in Japan, and details about them. Each game has a pop-up, containing a gameplay screenshot, release date and console, a description of the game, and links to its official website and any virtual console releases. As only games published in Japan are listed, Kirby's Avalanche is not on the list.

Special (スペシャル) links to other pages that do not fit in the other categories. There are currently three items listed:

THE LANDSCAPES OF DREAM LAND

Music (ミュージック) is a page which offers free downloads of sheet music of three orchestral arrangements from the Kirby 25th Anniversary Orchestra Concert. This is the only part of the site available in English. 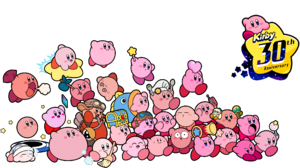 The Kirby Portal opened a teaser site for the series' 30th anniversary in early 2022. The site features unique artwork with 30 Kirbys representing different parts of the series, a download for a wallpaper featuring said artwork, and a redirect to the official Japanese website for Kirby and the Forgotten Land. This was expanded into a full mini-site later on, with news about the 30th anniversary and highlights for each of the 30 Kirbys.

The 30 Kirbys are as follows:

In addition, a secret wallpaper featuring HAL Rooms can be unlocked. To do so, the three "H", "A", and "L" letter need to be collected, each referencing recurring ways of reaching HAL Rooms in the games: