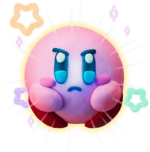 A Star Dash is a move that Kirby can perform in Kirby and the Rainbow Curse. It causes him to briefly grow in size, then propel forward at great speed, crashing through enemies and metal blocks in the way. The dash lasts for a few seconds, and can be steered using the Rainbow Rope. Using this move is necessary to defeat most of the Bosses in the game, or to defeat them more quickly at the very least. To perform this move, 100 Point Stars must first be collected.

The Star Dash takes on a few different forms when used under different Kirby transformations. They are as follows:

Once per day, using the Kirby amiibo allows Kirby to perform infinite Star Dashes in a given stage.