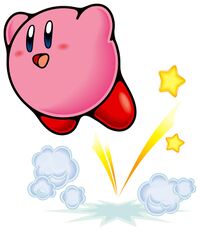 Artwork of Kirby jumping in Kirby: Nightmare in Dream Land

A Jump refers to the action of forcefully leaving the ground and traveling through the air for a short time before falling back down or initiating a Hover or another move. Jumping is an essential action for any platforming video game, and as such, is no stranger to the Kirby series.

When Kirby jumps, he makes a considerable distance off the ground, and is able to maintain his speed moving forward, or change direction mid-jump in order to avoid bottomless pits, climb cliffs, or get around other obstacles. In most titles, the height of Kirby's jump depends on how long the jump button is held. While in the air, attempting to jump again will typically result in Kirby puffing up and hovering, which will allow him to stay in the air and move higher, albeit more slowly. When Kirby jumps, his momentum can sometimes be used as a weapon, as he Headbutts enemies directly above him.

Some Copy Abilities can enhance Kirby's jump, most notably the Hi-Jump ability, which in more recent iterations also allows Kirby to jump in mid-air. With most other abilities, jumping is a necessary prerequisite in order to perform certain aerial moves.

Aside from Kirby, many playable characters and enemies are also capable of jumping, with some able to jump quite a bit higher than the pink puffball. One of the most famous examples of this is King Dedede's Super Dedede Jump, which can send him rocketing all the way to the top of the screen, then back down. Additionally, nearly all playable characters who cannot fly or hover make use of a technique called Infinity Jump in order to move through the air. This technique is arguably more effective than Kirby's hover in many instances, because it allows the user to act out of "flying" immediately with most of their attacks, rather than having to let out an Air Bullet first. Lastly, there is a technique in most games featuring multiplayer called Space Jump that allows characters to immediately teleport back to the position of player 1, but despite the name, this technique is not really a jump.

Aside from Kirby's standard jump (and those of most other characters), the following are more notable examples related to jumping: