The Nintendo DS is a seventh generation handheld console released by Nintendo in 2004 and a year later, in 2005, in Europe and Australia. It is Nintendo's first console to have two screens, with the lower being an interactive touch screen. The Nintendo DS has received two redesigns, the DS lite, and the DSi, the latter of which soon getting a redesign in the form of the Nintendo DSi XL. The Nintendo DS comes with a stylus, which can be kept secure by putting it in a small compartment on the DS, whose location varies depending on what type of DS it is. The Nintendo DS' cartridges are smaller than those of the Game Boy Advance, and are placed near the top portion of the DS. Game Boy Advance games can also be played on the DS and DS lite, but is removed from the DSi, due to weight conservance. 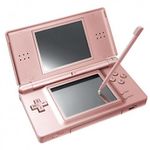 The Nintendo DS Lite is the second member of the Nintendo DS line of consoles. It offers some changes from the regular version, including differences in screen brightness, lighter weight, smaller size, increased battery life and capacity, greater shock resistance, and other minor changes.

The Nintendo DSi is the third member of the Nintendo DS line of consoles. It features some enhancements of the original DS hardware and software, such as; camera functions, updated user interface, a DSi Shop, similar to the Nintendo Wii Shop Channel, and many other features. It retains some other features, however, such as DS Download Play, Pictochat, and an alarm function. One of the biggest changes between the DSi, and the original DS models, was the removal of the Game Boy Advance slot. The DSi later received a redesign in the form of the Nintendo DSi XL (Nintendo DSi LL in Japan). The appearance of the DSi is basically the same as the DS, except with bigger screens, two cameras on the inside and outside, and the "power" button on the bottom left corner of the inside, instead of the outside. The DSi's stylus design is visibly altered as well, being slightly longer, and of a different color.

The design of the DSi would greatly influence the Nintendo 3DS which would come out a few years afterward.