A World Map refers to any image or construct that represents an entire playable area in a video game. Typically in addition to viewing a visual representation of a world - with its major areas and their locations relative to one-another - a world hub screen will allow the player to either view information about an area by scrolling over it, or warp the playable character to an unlocked location. Often, world hubs will start out incomplete (whether landmarks are simply not shown or entire sections of the map are obscured) and be filled by having the playable character explore that region. World hubs are distinguished from Level Hubs in that world hubs will allow access to whole levels, whereas level hubs allow access only to their stages, and to the levels adjacent, in most cases.

In the context of the Kirby series, world maps are often used only for the purpose of selecting levels. The first game in the series to do this was Kirby's Dream Course, which showed a depiction of all of the various courses on one continuous screen. (Despite coming out before this, Kirby's Adventure does not have a proper world map, instead merely having a series of level hubs strung together.) Other Kirby games that feature a world map include the following: 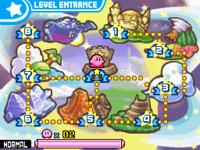 The first of six sections of the world map for Kirby: Triple Deluxe.

In Kirby & The Amazing Mirror there is a special item which Kirby obtains just before entering the Central Circle called the World Map. This item enables the player to see the world map at any time during gameplay.