From WiKirby, your independent source of Kirby knowledge.
Jump to navigationJump to search
This jingle usually plays when Kirby does his dance. (Kirby Super Star version.) 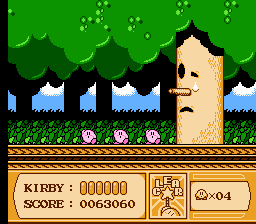 This article is about the dance in a general context. For the music that plays with it, see Kirby Dance (theme).

The Kirby Dance is a dance Kirby does in most of his games. Kirby's "dance moves" (sprites used in the dance) within the dance may vary between games and scenarios. Mostly in older games where game memory was limited, it is a common tradition to reuse sprites that already have a use elsewhere during the Kirby Dance. Usually, the dance starts whenever Kirby completes a level, but in some games, like Kirby's Dream Land 3, Kirby will only dance under specific circumstances, usually when he defeats a boss. In the games where he does dance regularly, he may create two copies of himself and dance for a longer period of time upon obtaining a Star Rod piece or when he gets the best possible score in the Goal Game, for example.

Kirby dances for a long amount of time and with two copies after obtaining a Star Rod piece by defeating any of Kirby's Pinball Land's bosses, except for King Dedede. In addition, every 500000 points that are scored, three Kirbys will perform a dance, but many of the dances are different than a normal Kirby Dance, for example, a dance which includes the three Kirbys jumping over each-other repeatedly, or a dance including the three Kirbys balancing on top of each-other while walking to the left of the screen.

Kirby will dance upon completing every course except Course Dedede in Kirby's Dream Course. Kirby will always do the long version and create copies no matter what his score is. In 2-player mode, only the winner will dance, although both Kirby and Keeby will dance if they tie.

Notably, Kirby's Dream Course features an unlockable bonus feature called the "Dance Select", which allows the player to view all of the possible dances in the game from the main menu. This is unlocked by earning Silver or Gold Medals on all Main Game and Extra Game courses. There are eight distinct dances for the 1P Game and five for 2P Game. Of the 2P Game dances, two each depict Kirby or Keeby winning, while the fifth is for draws.

In Kirby's Dream Land 2, Kirby will dance after the Goal Game or whenever he defeats a boss, with the exceptions of King Dedede and Dark Matter. Kirby will not create copies of himself in the Goal Game no matter how high he gets, but when he defeats a boss, (besides the bosses listed above), he will create copies of himself. If Kirby is currently with an Animal Friend, they will not be copied, but will participate in the dance as well.

Notably, Kirby's Dream Land 2 features more variations of the Kirby Dance jingle than any other title in the series, having six in total. Five of them play after the Goal Game, with longer ones playing depending on how high up the player gets in it, while the sixth and longest variation plays after boss fights.

In Kirby's Block Ball, Kirby will dance whenever he completes a stage, usually below the player's total high score.

In Kirby Super Star and Kirby Super Star Ultra, the Kirby Dance is performed in four out of the eleven modes. In addition, during the Kirby Master video in Kirby Super Star Ultra, Kirby will do the long version of the dance, but instead of creating copies, two Waddle Dees join him. It should be noted that in the game modes, if a Helper is currently assisting Kirby, they will also participate. Also, the short version of the dance's jingle sounds different than the long version, and the Kirby Master video plays a different-sounding jingle than the other two versions. However, the only differences between versions (besides the length, of course) is that different instruments are used. The modes the dance is performed in are the following:

In Dyna Blade, Kirby performs a short dance without creating copies upon completing the Goal Game.

In Milky Way Wishes, Kirby will dance shortly without creating copies upon obtaining a Sparkling Star from a planet.

Once Kirby has completed the last round in one of the difficulties in the Round Clear mode, he will get on his Warp Star and leave the screen. He then come back with two of his clones, and all three will start dancing.

In the Game Boy version, the Kirby dance sprites are drawn at double the size of Kirby's usual gameplay sprites. According to the Kirby's Dream Collection Special Edition booklet, this was done because they could show more detail by using larger graphics.

In Kirby's Dream Land 3, Kirby will dance after defeating every boss except King Dedede, Dark Matter, and Zero. If Kirby is controlling an Animal Friend, they will once again dance with Kirby. In this game, Kirby will only do the short version of his dance, and will not create copies.

In Kirby: Canvas Curse, the Kirby Dance happens after the Goal Game, and after defeating a boss at the end of each world, but with some differences, since Kirby himself can't dance like he usually does due to being transformed into a ball. Instead, he'll bounce around while its jingle plays, and in the top screen, five Kirbys in a sepia colored screen will dance normally. A short dance will happen after the Goal Game, no matter the score, and a long dance will always happen after defeating a boss. 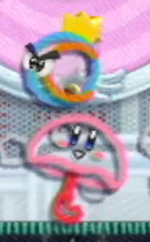 In one of the possible variations of the victory dance in Kirby's Epic Yarn, Kirby and Prince Fluff will take on the shape of a baseball and umbrella. These are transformations that aren't used in regular gameplay.

Kirby and Prince Fluff will dance after the Goal Game in Kirby's Epic Yarn and Kirby's Extra Epic Yarn, and after obtaining a piece of the Magic Yarn. In normal stages, only the short dance is used if the stage is cleared with a Bronze or Silver rank, but a long dance will be used if a Gold rank was obtained. Obtaining a piece of the Magic Yarn will always result in a long dance. Much like in the main series, the dances performed are randomized to an extent, with several involving the use of various Yarn Transformations. One of these has Fluff and Kirby transforming into a baseball and umbrella, which are forms not seen in regular gameplay.

In Kirby's Return to Dream Land, Kirby will dance after completing the Goal Game, after obtaining a piece of the Lor Starcutter, and during the Kirby Master video. He will dance for a short period of time after completing the Goal Game if his score is under 1, and dance for a long period of time if his score is 1. He will always dance for a long period of time after any of the two latter conditions are met. Additionally, during the Kirby Master video, along with normal Kirby, King Dedede, Meta Knight, and Bandana Waddle Dee, a yellow Kirby will join the dance, which is presumably a copy. Aside from that, Kirby never creates copies during the dance.

In Kirby: Triple Deluxe, once again, Kirby will dance after the Goal Game. If his score is less than 1, he does a short dance, and if his score is 1, he does a long dance. He will not create copies after completing the Goal Game. He will also dance after obtaining a grand Sun Stone, and do the long dance, as well as creating copies. Finally, during the Kirby Master video, Kirby does the long version, and is joined by King Dedede.

In Kirby and the Rainbow Curse, Kirby and Elline dance whenever clearing a stage in Story Mode, with a short dance for regular stages, and a longer one after defeating a boss. In the last stage - The Final Battle - Kirby starts a dance after Elline and Claycia are reunited, but this dance is interrupted when Dark Crafter emerges from Claycia's blinders.

Kirby will dance after the Goal Game in Kirby Star Allies, as usual. He'll perform a long dance if his score is 1, and a short dance if his score is less than 1. He'll dance for a long period when he defeats every story mode boss, (except the final boss), as well as every boss in Heroes in Another Dimension, dancing for a long period of time. While he never creates copies after either condition is met, he'll dance with any active friends.

Kirby will do the short version at the end of each stage that ends with three Waddle Dees in a cage, accompanied by those same Waddle Dees and Elfilin. The long version is performed after freeing Elfilin in Point of Arrival and Lab Discovera, alongside defeating an end-of-area boss. The long version is also performed after initially resurrecting Leongar in the Isolated Isles of Forgo Dreams, in which Leongar also joins in near the end.

In every game in the Super Smash Bros. series, Kirby performs a variation of his dance whenever he wins a battle, along with the theme. A shorter version of the dance is also mapped to his up-taunt in Super Smash Bros. Brawl and subsequent games. 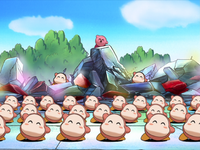 Kirby and the Waddle Dees dancing together at the end of the episode Pink-Collar Blues.

In the Kirby: Right Back at Ya! episode Pink-Collar Blues, the Waddle Dees perform the Kirby Dance after defeating the Domestic Servant Robot and being re-hired by King Dedede. Kirby initially seems to be unaware of this dance, but quickly picks up on it. This is insinuated to be when Kirby first learned the dance that would later become associated with him in the games, though it is never seen again in the anime series.