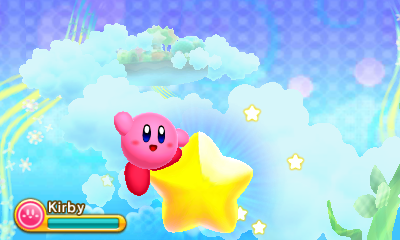 An example of Kirby breaking the fourth wall in Kirby: Triple Deluxe by waving at the player.

The term fourth wall is used to describe the separation of the audience from a performance. It is originally derived from stage play, where an imaginary fourth wall is said to separate the audience from the characters being portrayed, though it need not be a literal wall. This wall is meant to exist in the context of the story, which means that if actors look beyond the wall at the audience, whether intentionally or not, they are said to be 'breaking the fourth wall', thus breaking the illusion of a self-contained story. This can be pushed further by having actors directly address or interact with the audience, which is usually done for comedic effect or satire. Another means of breaking the fourth wall includes having the actors acknowledge their status as fictional characters, interacting with a narrator, or tampering with stage elements not meant to be interacted with such as backgrounds, cameras, or in the case of video games, the user interface. Breaking the fourth wall is particularly common in children's media, often as a method to engage the children with the characters in question.

Examples in the Kirby series[edit]

The Kirby series breaks the fourth wall on many occasions, though it is important to distinguish the difference between interactions in menus and instruction manuals and those in actual gameplay. The former cases are understood to take place outside of the context of the proper story, and as such are not canon. (For example, a menu screen that tells the player to "Press Start" is not considered breaking the fourth wall.) This article will only focus on examples of the fourth wall being broken in gameplay or in-game cutscenes.

Kirby saying farewell to the player at the end of Kirby's Dream Land.

Kirby and his friends waving at the player at the end of the Kirby Star Allies story mode.

One common way that video games in general will break the fourth wall is to treat the display screen as a physical barrier within the game, or at least as a camera. The Kirby series does this on several occasions by flinging its characters into the "screen" for a more dramatic defeat. In such cases, the screen is often assumed to be a glass window.

In many games in the series, Kirby will wave at or otherwise acknowledge the player during certain moments. The first example of this is the ending of Kirby's Dream Land, where Kirby hoists up a sign in the very last cutscene saying 'bye-bye'. This tradition carries on through many games in the series, with the ending of Kirby Star Allies having Kirby and any of his present friends waving at the player as they fly away.

In several games, particularly later ones, symbolic objects such as Doors and goal doors are directly interacted with as objects in the environment. This is particularly prevalent in Kirby: Triple Deluxe and Kirby: Planet Robobot. Enemies such as Mirras and Nidoos can even take on the appearance of these symbolic objects, blurring the line between gameplay and story functionality.

Another aspect that blurs the boundaries of the fourth wall is in-game dialogue from the characters. Generally, the characters will speak whichever language the system is set to, whether that is English, Japanese, or any number of languages each game has been translated into. This is not necessarily meant to indicate that the characters are speaking these languages in-universe, but that the dialogue is merely being translated such that the player can understand it. This is especially true of games that feature constructed languages, such as Kirby Star Allies.

While the game is paused, Kirby will start dancing in place if left alone for long enough. This example is particularly notable as nothing is meant to move during a pause session.

The queen giving the player a menacing glare in the False Ending.

At the end of the False Ending cutscene in Kirby 64: The Crystal Shards, the queen turns to face the camera with an ominous expression on her face, as a way to indicate that the player isn't quite finished with the game. 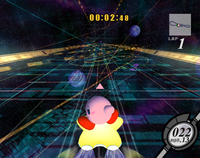 Kirby motioning for the player to make an input in Kirby Air Ride.

While Kirby is riding an Air Ride Machine, he will acknowledge the player in a number of different ways. When left to coast forward for an extended period of time, Kirby will look back and motion for the player to make an input. When performing a smooth landing after a glide, Kirby will turn and pose ecstatically.

In the intro cutscene, the opening narration specifically states that the Magical Paintbrush is transported to the player's hands (as another way to describe the Nintendo DS stylus).[1]

During the battle with Grand Doomer, it will start conjuring enemies to attack Kirby in the final phase. One of these enemies can be a Waddle Dee, and if it is conjured and allowed to fall to the floor, it will wave briefly toward the player before proceeding to walk around as usual.

In Kirby's Return to Dream Land Deluxe, enemies like Waddle Dees, Bronto Burts, Waddle Doos, Blippers and Kabus are launched into the "camera" when hit by Super Ability attacks.

Magolor directly addresses the player at the beginning of the New Challenge Stages, explaining the game's backstory and following up on Kirby's Return to Dream Land. He refers to the player as a separate entity from Kirby, but does not otherwise break the established continuity of the games.

In this title, it is possible for Kirby to be knocked into and splat against the fourth wall directly whenever hit by a large object moving in toward the player.

At the start of Fine Fields - Stage 1, Kirby casually breaks the fourth wall by waving to the player.

Some bosses are able to interact with the screen in a way that it hinders the player's view, with Paintra (covering the screen with paint) and Pyribbit (burning the screen to cover it with ash) being the most prominent examples.

In some stages, Kirby or other characters interact with Goal Doors as objects needed for Kirby to advance in his adventure.

On two separate occasions, when Kirby uses the Hypernova ability to defeat Flowery Woods and Flowered Sectonia, their Health bars are ripped from the user interface and fly into Kirby's mouth. 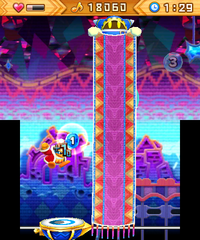 Magolor holding up a blindfold banner in Dedede's Drum Dash Deluxe to obscure the player's view of the stage.

Breaking the fourth wall is actually used as a hazard in this game; in a few stages, there are obstacles called "blindfold banners", which temporarily cover part of the screen. As they would have no impact on King Dedede within the setting of the game, they exist purely to hinder the player. They primarily appear in level four, "Bouncing Boss Battle", and the secret version of level 2, "Must Dash", carried by Bronto Burts. In the "C-R-O-W-N-E-D: Reprise" stage, Magolor appears with a blindfold banner in one segment, directly facing the player and laughing if King Dedede falls into a pit.

This game continues the gimmick from Kirby: Triple Deluxe where Kirby can be knocked into the screen by certain obstacles. When he is piloting the Robobot Armor, he will leave a temporary crack in the screen when he hits. It's possible to make the Halberd slam into the screen and crack it during Star Dream's third phase, if it gets caught in both the "Install Hole" and "Fatal Error" attacks.

In Overload Ocean - Stage 4, when one of the giant ice cream cones falls over, bits of it "stick" to the screen.

As in Triple Deluxe, in some instances Kirby interacts with Goal Doors as important objects needed for him.

In President Haltmann's boss battle, he can also cover the screen in Haltmann money, hindering the player's view.

In its normal form, Star Dream's eye is curved inward, giving the impression of staring at the player.

Colossal Spear Waddle Dee waving at the player during battle at the Seaside.

Colossal Waddle Dee waving at the player during battle in the Grasslands while having low HP.

On rare occasions when fighting Colossal Waddle Dee in Team Kirby Clash Deluxe or Colossal Spear Waddle Dee in Super Kirby Clash, they may stop and wave at the player, completely dropping their angry expression while doing so.

During the staff credits, Kirby can sometimes be seen watching a piece of the credits text scroll by.

The Crash Rush Friend Ability sends Kirby's allies splatting against the screen at the end of it.

Kirby and Elfilin wave at the player as they enter Northeast Frost Street.

When riding on certain Warp Stars in Downtown Grassland and Northeast Frost Street, Kirby, and Elfilin or Bandana Waddle Dee if present, will wave at the player.

During The Dream Discoveries Tour, the "automatic language detection" dialogue at the beginning can be interpreted as a mild fourth wall break, as the audio file being played during this cutscene is determined by the system's language settings. If the language is set to French or Spanish, then the system region determines which of the two dialectal versions play. If the region is set to Japan, The Americas or Hong Kong/Taiwan/South Korea, then the Canadian French and Latin American Spanish versions will play. If the region is set to either Europe or Australia/New Zealand, then the European versions will play. Both Simplified Chinese and Traditional Chinese settings will cause it to play the English audio instead.

A player being launched into the screen in Kirby's Dream Buffet.

In the Battle Royale stages of Kirby's Dream Buffet, Kirbys are launched into the screen when K.O.'d using Invincible Candy, similar to how it works in the Super Smash Bros. games.

Starting with Super Smash Bros. Melee, the games in the Super Smash Bros. series allow fighters who are launched beyond the top blast zone to occasionally splat briefly against the screen in a process called a Screen KO. The exact mechanics of this process differ between each game.