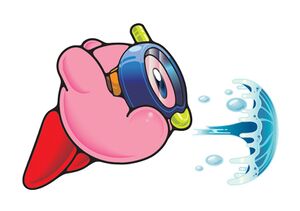 Artwork of Kirby using the Water Gun in Kirby: Nightmare in Dream Land.

The Water Gun is an attack that Kirby can use while underwater. The attack is characterized by Kirby blowing jets of water and/or streams of bubbles out from his mouth at enemies to defeat them.

If Kirby has the Sword, Parasol, Hammer, UFO, Metal, Spear, Bell, or Staff abilities, he cannot perform this attack underwater, but he can use the respective ability underwater instead. If Kirby has any other ability besides these, he will still use the Water Gun.

If Kirby has the Water ability, his water gun powers up into the Enhanced Water Gun, which attacks multiple targets and reaches further than the normal Water Gun. Additionally, starting with Kirby's Return to Dream Land, Kirby can use the Stealth Water Gun if he has the Ninja ability, which allows him to attack upwards from the water's surface.

This was the first game to feature this attack, and has featured in nearly every main series Kirby game since then. While underwater, Kirby can continuously fire a water jet from his mouth, which can be aimed in the four primary directions. Its range is about on par with the Needle ability, though it only aims in one direction at a time. While not the most powerful attack, it is an effective deterrent in much the same way that Air Bullets are. Kirby cannot move and will slowly sink while executing this attack.

In Kirby's Dream Land 2, the Water Gun returns, and is characterized as a stream of bubbles. Other than that, it functions the same as before, with the same range.

Water Gun takes a new form in Kirby Super Star. It is characterized as a single burst water projectile that fires in whatever direction Kirby is facing and travels for decent range, on par with the Cutter ability.

Kirby's Water Gun in this game also has the unique property of being able to deflect the objects that Acro will try to throw at him.

In Kirby & The Amazing Mirror and Kirby: Squeak Squad, Water Gun looks and behaves exactly like it did in Kirby: Nightmare in Dream Land.

Water Gun in Kirby's Return to Dream Land functions much like it did in Kirby Super Star. Additionally, some Copy Abilities will give it additional functions:

Kirby is the only character who uses the Water Gun, as the other characters will use their weapons.

Water Gun returns (with only a slight visual change) in Kirby: Triple Deluxe and Kirby: Planet Robobot with more or less the same functionality from its previous appearance in Kirby's Return to Dream Land. With the absence of the Water ability, only the Ninja variant is available in addition to the default.

In Kirby Star Allies, Water Gun still behaves like it did since Kirby's Return to Dream Land, but now it can be fired in 8 directions (including the four diagonal directions). The Water ability returns in this game along with its Enhanced Water Gun.