Gryll[1][2] is the final boss of the SNES version of Kirby's Star Stacker. This boss appears after the credits roll in the main game, as a surprise encounter if Kirby managed to beat all his previous foes without losing once, and is the most difficult challenge in the game. Gryll appears to be some sort of space-traveling witch who flies around on a broomstick. Their exact gender is unknown, as none of their appearances use gendered terms (which is much more often the case in the series' Japanese text).

Gryll has three onion minions named Sugar, Salt, and Pepper, which they bring with them to challenge Kirby. Unlike the other opponents, Kirby battles Gryll in outer space. Gryll attacks Kirby by thwacking him with their broomstick. 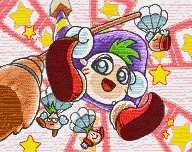 Gryll makes their debut in the Kirby's Star Stacker remake as the surprise final boss in the Story Mode. They are fought after the staff credits if Kirby didn't lose a single match prior, and their only motivation seems to be challenging Kirby to test his skill. The round is very similar to the prior one with King Dedede, with the difficulty set at "Super Hard" on the Amateur setting and "Insane" on Professional difficulty. The board also starts piled fairly high with blocks, with more than half of them being Hard Blocks. After clearing the round, Gryll admits defeat amidst a pile of blocks and the game is truly over.

Gryll makes a cameo as a sticker in Kirby: Planet Robobot.

Gryll appears alongside Brobo as one of the Stone transformations in Kirby Star Allies and can be seen in the Celebration Picture 'Bad Boss Brothers'.

Gryll makes a cameo as a Character Treat in Kirby's Dream Buffet.

Gryll appears as a primary spirit in Super Smash Bros. Ultimate, and can be obtained via World of Light, by battling the spirit in the Spirit Board, or by purchasing the spirit from the Shop. Gryll is a novice level grab-type spirit, with level 1 stats of 527 attack and 431 defense, plus 2,636 attack and 2,156 defense when leveled up to level 99. The spirit has one support slot. The Spirit battle pits the player against a Jigglypuff. 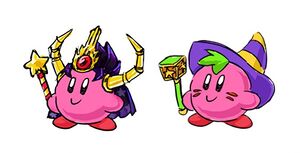 Concept art of Nightmare and Gryll-inspired gear for Beam Mage.