This article is about one of Kirby's main moves. For the e-Reader title on Game Boy Advance, see Kirby Slide.

A Slide (otherwise known as Slide attack) is an attack that Kirby and most other playable characters can perform in most main-series Kirby games. This attack can be used regardless of what Copy Ability Kirby may or may not have (with a few exceptions), and involves him sliding forward along the ground with a low profile and his feet out in front. Any regular enemy or block can be attacked using a slide, though it is ineffective against Bosses and Mid-Bosses (with a few exceptions). 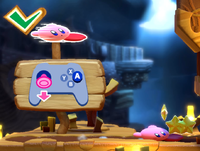 To perform the attack, the player must press the jump button while Kirby is crouching. This causes Kirby to slide a considerable distance forward (depending on the terrain) with his feet out front. If he hits an enemy that is not invulnerable to it, he will deal damage to that enemy and bounce off. This can be done anywhere out of the water, and requires no Copy Ability to use. In addition to its offensive capability, Kirby can use a Slide to dodge an attack, or just move quickly forward.

Slide can be used in some titles to break barricades of Star Blocks or cracked stone blocks that lie under Kirby's feet, making it a quicker method of destroying such blocks than attempting to Inhale them. Sliding works on most standard enemies, but has no effect generally on bosses or mid-bosses. In Kirby & The Amazing Mirror and Kirby: Squeak Squad, some Copy Abilities affect how Kirby slides, with Sword having Kirby lunge forwards with his sword, Bomb having Kirby hold a bomb in front of him if he is holding one before sliding, and Fighter allowing Kirby to damage Mid-Bosses in the former game.

Starting with Kirby's Return to Dream Land, Kirby and his friends can also perform this move while holding an item, making it their only attack option whilst doing so.

In Kirby and the Forgotten Land, when Kirby slides near an enemy or other such target, the slide may automatically be directed towards the target. This effect is more pronounced in Spring-Breeze Mode. Additionally, this game is the first to allow Kirby to jump before the slide concludes. Doing this just before the pause at the end of the slide allows Kirby to travel slightly faster than his regular run, making it useful for speedrunning. 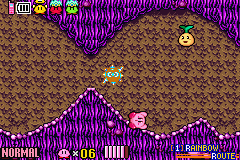 Kirby rolling down a hill.

In Kirby & The Amazing Mirror and Kirby: Squeak Squad, sliding down a steep slope (45 degrees or more) causes Kirby to start rolling down the hill, which damages any enemy he encounters.[1]

The Slide can be performed in the following games: