This article is about the version on Game Boy. For the Super Famicom version, see Kirby's Star Stacker (Super Famicom).

Kirby's Star Stacker is a puzzle game and a Kirby spinoff released on the Game Boy in 1997. Playing similarly to Dr. Mario, this game tasks the player to line up stars in a grid between Kirby's Animal Friends to "stack them" and remove them from the board, in order to prevent them from overflowing the board and forcing a loss.

Kirby's Star Stacker is compatible with the Super Game Boy, which gives the game a wider range of colors and also adds a special border around the screen, much like Kirby's Dream Land 2. Kirby's Star Stacker was later ported to the Nintendo 3DS's Virtual Console in 2011 for Japan, 2012 in Australia and Europe, and lastly 2013 in North America. The game also received a Japan-exclusive remake on the Super Famicom, also known as Kirby's Star Stacker.

The game is a puzzle game in the basic style of Tetris. Domino-like groups of two connected blocks, which can be controlled with the directional pad and turned with the A and B buttons, fall from the top of the playing field one by one, eventually landing at the bottom of the field or on top of other blocks. Once the blocks have landed, the domino breaks up, and each block is individually affected by gravity. Six types of blocks exist in the game: three Friend Blocks are based on the Animal Friends from Kirby's Dream Land 2 (Rick the Hamster, Kine the Sunfish and Coo the Owl), Star Blocks, Bomb Blocks, and Hard Blocks. The goal is to score stars by placing one or more Star Blocks between two matching Friend Blocks, which will then cause both the Friend and Star Blocks to disappear, adding to the score total on the right-hand side. Hard Blocks and Bomb Blocks can likewise be sandwiched between Friends, the former transforming into Star Blocks, and the latter destroying the row of blocks they are on when this is done.

Apart from the blocks that fall from above slowly piling up unless destroyed, King Dedede regularly pounds the ground with his fist and causes a new row of blocks to appear at the bottom and push the already existing blocks upwards; the frequency of this depends on the difficulty level. The game continues until the game mode's victory requirement is met or the two columns in the middle of the screen have reached the top, the latter preventing new dominoes from appearing and causing a Game Over. 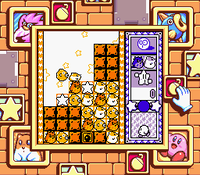 Gameplay of Challenge mode (on the Super Game Boy).

In the game there are 4 modes:

There is also a high score table for Challenge, and Time Attack mode, showing the top 3 scores for each.

Join Kirby as he stacks the falling stars with help from his friends, Rick the Hamster, Kine the Sunfish, and Coo the Owl. Watch out for King Dedede. He is out to stop you! With a few quick moves and some well-timed strategy, you can quickly outwit him and move on to the next challenging level.

Kirby's Star Stacker features pure puzzle fun for everyone. From above, blocks rain down constantly. From below, whole lines appear with unrelenting clock-like regularity. Simply sandwich the stars between Kirby's pals and you'll soon be on your way to the high score.

(This description was reused for the game on the My Nintendo Store.)[1]