Dedede's Drum Dash Deluxe is a Nintendo 3DS eShop-exclusive spin-off title, which expands upon the Sub-Game Dedede's Drum Dash from Kirby: Triple Deluxe. It was released in 2014 for Japan, North America, and South Korea, and in 2015 for Europe and Australia, alongside Kirby Fighters Deluxe.

Much like the original Sub-Game, the player plays as King Dedede, and bounces along each stage on drum platforms to the beat of various musical pieces from the Kirby series. The goal is to reach the end of the stage with the highest score possible, by completing the stage as quickly, with as few mistakes, as many backbeats, and as many coins as possible. At the same time, Dedede must contend with various obstacles on his path, including spikes, enemies, breakable drums, and more. If he runs out of health, the stage ends early with no stage clear bonuses. Getting a higher score can increase the Trophy rank to one of four different types. The player can also unlock masks for King Dedede to wear; however, some of them can only be unlocked by having data for Kirby: Triple Deluxe on the same system. 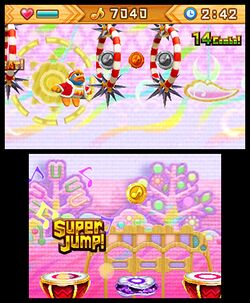 In Dedede's Drum Dash Deluxe, King Dedede must bounce along stages made of drums to the beat of the background music while avoiding obstacles and gathering coins. This particular screenshot comes from the secret version of Stage 1: Floral Fields.

Dedede's Drum Dash Deluxe involves King Dedede hopping along a series of big drums which make up the topography of each stage. There are essentially only two ways to control Dedede as he moves across the stage, as follows:

To move forward, King Dedede has to jump across the drums and head toward the right, with the player needing to make the decision of how high King Dedede ought to jump and where he will land afterward in order to collect coins and avoid danger, such as colliding with enemies and hazards or falling into the bottomless pit between the drums. Normal jumps will keep King Dedede in the bottom screen of the 3DS, while High and Super Jumps launch him into the higher screen, so the player will need to keep eyes on both screens while playing. The pace of each stage is dictated by the tempo of the music playing in the background, with each subsequent stage being faster than the previous.

King Dedede has a bar of health, which can be depleted if he runs into a harmful hazard, such as an enemy or a hazard like a spikeflip drum. If King Dedede's health runs out, he will be defeated. This bar of health is smaller in the secret versions of each stage.

The following enemies appear in Dedede's Drum Dash Deluxe, and must generally be avoided:

The following are notable objects and hazards that need to be contended with: 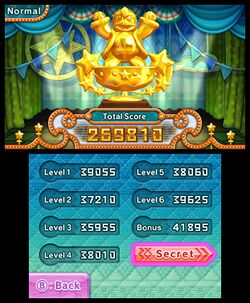 Unlike in Dedede's Drum Dash, overall score from every stage contributes to a trophy that increases in value the more points are earned. This is similar to the way trophies work in New Challenge Stages.

The objective of Dedede's Drum Dash Deluxe is to earn as high a score as possible on each stage, which naturally includes reaching the end of the stage in order to earn the stage clear bonus. Points are earned in the following manner:

At the end of each stage, there are four bonus objectives that, if met, will provide an extra 1000 points each. They are as follows:

The only way points can be lost during a stage is if King Dedede takes damage, incurring a 100 point deduction.

The following is a list of staff who have worked on Dedede's Drum Dash Deluxe:

(This description was reused for the game on the My Nintendo Store.)[1]