Kirby's Toy Box[Japanese title] (カービィのおもちゃ箱, Kābyi no Omochabako) is a collection of ten Kirby-themed mini-games which were broadcast on the Satellaview service of the Super Famicom in Japan, starting on February 8, 1996.[1][2]

The eight original games are ball-related, such as Baseball which involves a simple game of baseball, except that Kirby is substituted for the ball. Most of them are played like traditional arcade games where the player has to attain a high score before hitting a Game Over. The trial versions of Samurai Kirby and Megaton Punch were included as a promotion for Kirby Super Star which would release soon after.

The games aired daily in pairs (February 8 through 28 and then from March 7 onwards), with the two Sub-Games from Kirby Super Star starting on February 22, 1996.[3] 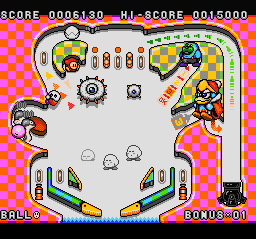 Screenshot of the Pinball mini-game

This is a simple game of pinball on a single board, retaining some concepts featured in Kirby's Pinball Land. The player has to launch Kirby from a Cannon into the playfield and keep him from rolling down the drain. There are various enemies in fixed spots which when hit will earn the player points, while certain combinations will also light up items for short-term assistance.

Both lower and upper rollovers add 30 points. Lighting up upper ones gain the player Energy Drinks in the outlanes, while doing the same with the 3 Kirby sprites place a Maxim Tomato between the flippers to protect from draining the ball. 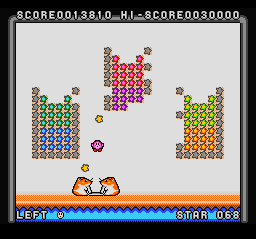 Screenshot of the Star Breaker mini-game

A Breakout-style game with a few major differences to Kirby's Block Ball. In place of a paddle are two Ricks with a trampoline which with their movement also dictate Kirby's direction, who acts as the ball. The key difference is the constant gravity applied to the bouncing Kirby.

There are 5 stages where every Star-shaped brick has to be crushed (70 points). A "Star" counter is present which constantly decreases on its own, and when higher than 0 (zero) grants Kirby one safe bounce off the ground if he misses the trampoline. Each crushed brick disposes a Point Star which when collected (10 points) increases the Star counter by 5, while each ground touch decreases the same by 10.

Once the player clears the first five stages, in the sixth is a Boss fight with King Dedede. There are no bricks to crush and Point Stars to be collected - instead, King Dedede has to be hit 10 times. He floats in the air in circles and every so often throws hammers at Ricks which can stun them for a second. Defeating King Dedede grants 11,000 points, and the game continues by cycling back to the first stage.

Kirby's Toy Box - Round and Round Ball[edit] 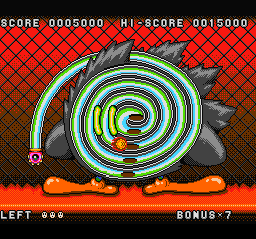 Round and Round Ball screenshot

In this mini-game, the player has to fire three Kirbys through a spiral tube (which is designed like Efreeti). The power of each shot has to be adjusted to aim for higher-scoring holes, while good timing ensures a multiplier or 1–2 bonus lives. From top to bottom: 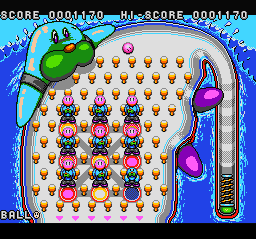 This is a mini-game inspired by Pachinko and A-One LSI Arrange Ball, an old handheld electronic game. The player is given exactly 9 Kirby balls, one for each of nine holes in a 3×3 set-up. Each ball is launched into the field by a plunger at adjusted power, and shall fall through pins in its way into unoccupied holes. The objective is similar to a bingo game - scoring rows, columns and diagonals.

Nine Mr. Frostys highlight occupied holes and one large lies behind the board. They otherwise do not serve any other functions.

Completing a single column or row awards a little over 200 points each time. Arranging all 9 Kirbys is awarded with 100,000 points and captioned with "Congratulations!". 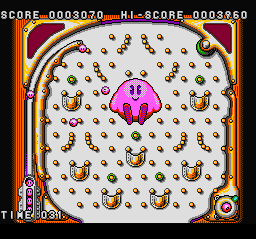 As the name implies, this is a mini-game based on Pachinko machines. The player controls the rotation of the knob (indicated in bottom-right corner) to adjust the power at which Kirby-shaped Pachinko balls are launched. An unlimited number of balls is given to score as many points as possible in 120 seconds.

For every ball landed into any of seven pockets 10 points are awarded. If one lands directly atop the big Kirby in the center, the player wins a temporary chance to earn more points - Kirby will raise his arms and award 100 points for each ball that hits him inside a 5 seconds frame.

Should the player quickly figure out the right power/angle of the knob, it is possible to make and keep most, if not all balls follow the same path into any of the pockets. In that case, scoring several thousand points is feasible in 2 minutes. 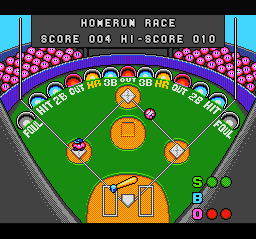 Screenshot of the Baseball mini-game

This mini-game is based on the real-world baseball, and the basic rules of the sport apply here. The player controls the bat and can move it inside its box, while pressing button A makes the bat rotate in order to hit an incoming ball. A ball is pitched from the central circle after a random time, velocity and angle, so the batter has very little time to correctly react to each pitch.

Objective of the game is to hi-score as many home runs. One shot to a HIT, 2B or 3B field makes all present Kirbys respectively move one, two or three bases towards the fourth (each means a home run), starting on the first base on the right. Batting a ball into the golden-colored HR field makes all present Kirbys complete a home run, and for each of them 1 point is awarded to the score.

Each missed or a shot to the FOUL field is a strike, and three of those are penalized with an out. Three outs and the game is over. Scoring the HR field clears out any strikes the player has received.

In the 2 player game, two players compete in ten rounds. Notably, the balls are considerably slower and harder to score. The player with more accumulated score wins. 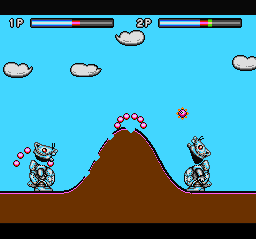 Screenshot of the Cannonball mini-game

In this mini-game dedicated to real-time multiplayer artillery battles, two players (or one player versus CPU) each operate a large mechanical robotic Rick. They can be moved slowly back and forth and lob spherical Kirbys at their opponents over hills and destructible terrain. The objective of this game is to destroy the other player's Rick first to win a round.

Head of one's robotic Rick acts as its turret and is angled up ↑ or down ↓ with respective D-pad buttons. Destroyed terrain cannot be walked over, while horizontally moving clouds hamper projectile trajectories. One Rick can endure 6 hits (its tone is also redder with each hit) which resets its turret's angle. Several terrain patterns are cycled through.

This is the only of ten mini-games where the goal is not setting a high-score. 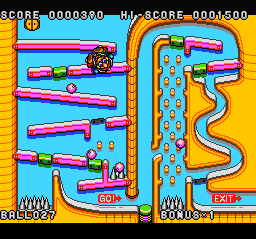 Screenshot of the Ball Rally mini-game

This is the last of eight original mini-games in the collection. The player has to guide as many from a total of 50 balls from the entrance door placed in top left towards the exit in bottom right. The only control is an A button press which alternates extension and retraction between two sets of green platforms.

In the first half, the left part of the field, they start by rolling down several pink slopes. Balls that make through are launched by a spring into the second half, which includes Pachinko-like pins that lead into spikes (but occasionally return balls back), and ultimately have to go down a spiral slide and into the exit.

These balls are dropped in at random delays (quicker as the game nears its end) into the field, so proper timing and swift commands are needed to avoid losing balls to spikes. As more Kirbys join the playing field, it becomes increasingly difficult to guide them all to the exit. Each consecutive ball doubles the bonus multiplier (2, 4, 8, ... 128) which resets whenever another is knocked out. When the counter is below 30 balls, several large rolled-up King Dededes may also join the field. Kirby balls are worth 10, while King Dedede ones are worth 100 points each.

Not much is known about the development for Kirby's Toy Box and it was rarely mentioned ever since release. In a Smash Bros. DOJO questionnaire, Masahiro Sakurai states he has never seen Kirby's Toy Box.[4] From the whole collection, only Star Breaker has a unique soundtrack which was composed by Takane Ōkubo. Other mini-games reuse background music and sound effects from Kirby's Dream Course, with the main exception of the title theme, which is a remix of the title theme from Kirby's Adventure.