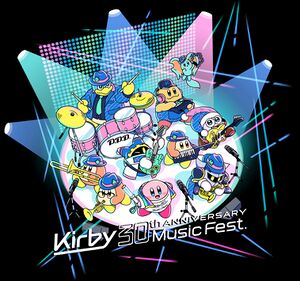 The Kirby 30th Anniversary Music Festival (also written as Kirby 30th Anniversary Music Fest.) was a music festival that happened on August 11th, 2022, to celebrate the 30th anniversary of the Kirby series. Initially only a single performance at 18:00 JST, an extra performance at 12:30 JST was added due to high demand.[1] It was held at the Tokyo Garden Theater and the evening performance was livestreamed for free worldwide, and an archive of the livestream was up until August 31st, 2022, 18:00 JST.[2]

Unlike the Kirby 25th Anniversary Orchestra Concert, which exclusively had orchestrated music, this event featured a large big band-style ensemble of 35 musicians, called the "Kirby 30th Anniversary Special Band Deluxe", that performed Kirby music in a variety of genres. There was also a large LED monitor that featured a moving Kirby, and Kirby's voice actress Makiko Ohmoto was present as a special guest. Neichel also made a surprise appearance during Special Live Performance: WELCOME TO THE NEW WORLD!, although with her face covered by a hat.

The following is a list of tracks that were performed at the concert.

The following is a list of staff who appeared at the Kirby 30th Anniversary Music Festival, as given on the official website:

The festival also featured a special performance by the Kirby sound staff recorded at the Kirby Café: Jun Ishikawa on keyboard, Hirokazu Ando on bass, Yuuta Ogasawara on drums, Tadashi Ikegami on saxophone, Megumi Ohara on keyboard and flute, and Shogo Sakai on guitar. Additionally, Shinya Kumazaki appeared to provide commentary, where he presented a trailer for Kirby's Dream Buffet and an announcement for a Japanese Blu-Ray re-release of Kirby: Right Back at Ya!. Lastly, Neichel made an appearance to sing "Welcome to the New World!" as a duet with Makiko Ohmoto.