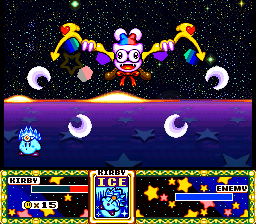 Marx using Shooter Cutter in Kirby Super Star; this is the first use of this attack in the Kirby series, but by no means the last.

Shooter Cutter[Japanese title] is a recurring attack that is used by several characters and/or bosses in the Kirby series. It is often used by Marx and Soul-form bosses and is infamous for being notoriously difficult to react to.

When used, Shooter Cutter throws out Cutter-like blades in the four intercardinal directions, flying straight out diagonally, and then looping around and returning to the entity which threw them. These blades often come out very quickly and with little forewarning, covering a moderate area around the user. It is also often the case that this move is used two or more times in succession.

Typically, while the blades are out, they can be inhaled and swallowed for the Cutter ability or spat out to counterattack.

The following table outlines in chronological order which games this attack appears in, which entities can use the attack, and any other pertinent notes.