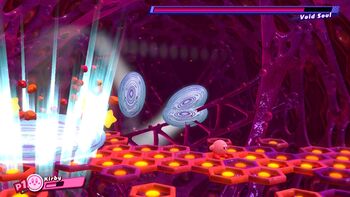 Bound Pound,[Japanese title] also translated as Bound Pond[from internal data][1] (and also called Sprint[Japanese title]) is a recurring attack used by various bosses (typically ball-shaped "soul" bosses) which involves the user bouncing along the background before slamming hard into the ground, creating shockwaves on landing and usually dropping Drop Stars in its wake. The first user of this attack was Drawcia Soul in Kirby: Canvas Curse, and it has since been reused by several subsequent ball-shaped bosses in the Kirby series.