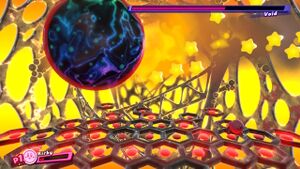 Deadly Sun[Japanese title] is a recurring attack that is used by several characters and/or bosses in the Kirby series. It is often used by Soul-form bosses and is notable for being easy to spot its telegraph.

When used, the boss travels to the background before suddenly catching fire and moving offscreen to the point and elevation at which it will reappear. It then streaks across the battlefield, usually horizontally, taking up roughly half of the screen as it does. It may also return from the other side to take up the other half of the screen.