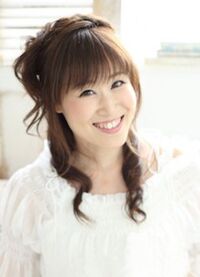 Makiko Ohmoto (大本眞基子 Ōmoto Makiko, born February 1, 1973) is a Japanese voice actress, and the main and current voice of Kirby. She first voiced him in Super Smash Bros., and made her debut in the Kirby series with Kirby 64: The Crystal Shards.

In addition to Kirby, she has voiced a few other characters as well alongside him throughout the Kirby series.

At the Kirby 25th Anniversary Orchestra Concert, Makiko Ohmoto demonstrated Kirby's voice live, and also performed a conversation between Queen Sectonia and Susie.[2] She also sang the first verse of "The Noble Haltmann," the anthem of Haltmann Works Company. For a promotional video for Kirby Battle Royale, she performed the voices of Susie and Bandana Waddle Dee.[3] For the Kirby 30th Anniversary Music Festival, she gave an interview, performed the voices of Kirby, Queen Sectonia, and Susie, and sang "Green Tree Memories from Kirby" and "Welcome to the New World!" (the latter as a duet with Neichel).

(Characters in bold are fighters.)