Heads up, Dream Landers! There's been a tidal wave of new information about the upcoming Kirby's Return to Dream Land Deluxe, including a new Copy Ability called Sand and the return of Festival! Other new information includes more sub-games and a new area called Merry Magoland. All this information is being added to the wiki as quickly as we can!

WiKirby also now has an official Twitter account for site news, updates on the Kirby series, and more! 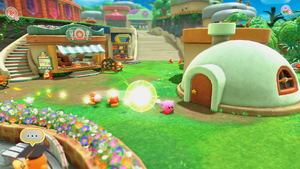 A Space Jump in progress in Kirby and the Forgotten Land.

This article is about automatic teleportation used to keep characters together. For information about the ability to jump while in the air, see Infinity Jump.

Space Jump refers to the ability/phenomenon of a Helper or other character to automatically be transported to Kirby's location via a star or glowing point of light. This happens automatically if the secondary character is left too far behind, or in some games can be intentionally triggered by that character's controlling player pressing the A button (B button in Kirby's Return to Dream Land).

This phenomenon occurs in all main-series games that utilize multiplayer in the main game modes, as well as in Kirby Mass Attack, implemented in order to keep the camera - and subsequently the action - centered on Kirby. This effect is not canon, which is to say that it does not actually take place in the storyline, and is instead merely a gameplay mechanic used to keep the party together.

In Kirby's (Extra) Epic Yarn, Angie works very similarly to a Space Jump, and could be considered that game's variation of the technique.

The space jump is also utilized in The Subspace Emissary, functioning exactly the same as it does in the Kirby series, though instead of a star, the transporting effect looks like a more generic blue glow, teleporting Player 2 to the location of Player 1, who remains the center of focus.