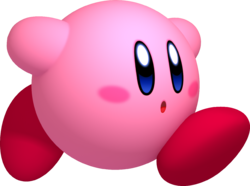 Artwork of Kirby doing a Dash in Kirby's Return to Dream Land.

Dash refers to the action of picking up speed, being the quick alternative to walking. In the Kirby series, this is done when the player taps twice quickly on the D-Pad/Control Stick/Circle Pad. When a dash is activated, Kirby or whichever other character is being controlled begins to run, moving faster than they can do when walking.

The ability to dash is present in all main series Kirby titles, except for Kirby's Dream Land and Kirby's Dream Land 2. In Kirby and the Forgotten Land, dashing is done merely by tilting the stick all the way in a given direction, and there are no longer any special attacks associated with it.

Dashing has many applications in addition to simply moving faster. While dashing, Kirby can move over small gaps in the floor without falling through them. In addition, dashing also allows Kirby to perform special dash attacks using most Copy Abilities in games with expanded move-sets. An example of this is the Fire ability in Kirby Super Star and related games, which causes Kirby to burst forward as a fireball instead of just breathing fire as usual. Kirby's Star Bullet also does more damage when released while dashing.

Momentum from dashing can also be transferred to aerial movement when Kirby jumps while dashing that can unlock further attack options. This momentum will be canceled as soon as Kirby takes in air to fly, however, but it can be retained indefinitely with the help of abilities like Wing.

The Super Smash Bros. series directly translates the notions of dashing and dash-attacks into fights, acting much the same as they do in the Kirby series. Each fighter has an attack which can only be employed while dashing. Unlike in the Kirby series, these attacks cannot send the fighters over an edge, with the one ironic exception being Kirby's dash attack in Melee.