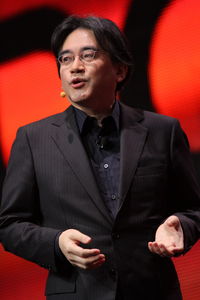 Satoru Iwata (岩田 聡, Iwata Satoru, December 6, 1959 – July 11, 2015) was a Japanese video game designer, producer and businessman who served as the fourth president and CEO of Nintendo from 2002 until his death in 2015. Iwata joined Nintendo in 2000 and was appointed Director that same year.[1] Since becoming Nintendo's president in 2002 – the first to be unrelated to previous presidents through blood or marriage – he has been credited as the executive producer for 13 Kirby games. He is also known for his general efforts to streamline the game development process without sacrificing game quality. Iwata was succeeded by Tatsumi Kimishima in September 2015.

While he is best known for his role at Nintendo, Iwata also worked at HAL Laboratory for two decades. This began with him working part-time as the company's only programmer in 1980, and then full-time in 1982. Iwata would later help create ties between HAL Laboratory and Nintendo, solidifying HAL as one of Nintendo's key affiliates and allowing it to grow as a company. A decade later, in 1993, Iwata became the president of HAL with the blessing of Nintendo's then-president, Hiroshi Yamauchi. He is credited with recovering the company from the verge of bankruptcy and bringing it fiscal stability from when he was appointed president until his departure in 2000.

Throughout his eventful career, Iwata worked on or oversaw the development of a considerable number of games. Some of Iwata's most notable works include Balloon Fight (1985), NES Open Tournament Golf (1991), EarthBound (1994), Pokémon Stadium (1998), Pokémon Gold and Silver Versions (1999), and Super Smash Bros. Melee (2001).

Listed below are the non-Kirby series games that Iwata worked on. Note that this list does not include games for which he is credited as an Executive Producer.