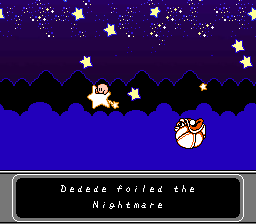 Screenshot from Kirby's Adventure, showing some of the ending narration from that game.

The Narrator is a character or entity who is responsible for telling the story, usually defined as a disembodied voice or source of text. Depending on the story being told, the narrator may be a character within the narrative or an external source of expository information. In the Kirby series, the narrator is often little more than a number of lines of text which appear in cutscenes in order to explain the proceedings. Kirby games tend to use narration sparingly, if at all, and the text is usually focused specifically on the motives and feelings of the characters without going into too much detail about setting.

The following Kirby games use narration for the purposes of storytelling. For the sake of brevity, text meant to explain the game rules and mechanics and flavor text such as pause screen descriptions will not be covered here, even if it is written in a narrator-like fashion. Character dialogue within cutscenes will also not be counted, unless it is accompanied by narration.

The first example of in-game narration in the series occurs in the final cutscene of Kirby's Adventure. The text here explains Nightmare's motive, as well as justifying King Dedede's actions before wrapping everything up. The text varies somewhat between the original game and the remake, Kirby: Nightmare in Dream Land.

Narration did not appear again within the series until Kirby Super Star. This game features limited narration for some cutscenes within the game, though all others go completely without narration. Once again, the dialogue differs somewhat between the original game and the remake, Kirby Super Star Ultra.

A narrator also appears as part of the Computer Virus boss, but because of the nature of the boss, it can be considered an in-universe part of the fight rather than external narration.

The SNES version of Kirby's Star Stacker features text narration for each of its story mode cutscenes. However, since the game was formally released only in Japan, no official English version of this narration exists.

Kirby Tilt 'n' Tumble features an opening cutscene with narration throughout. Only one additional line of narration is used after this scene, just after King Dedede is defeated at the end of the game. 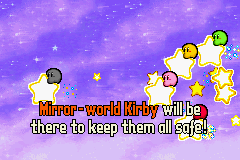 Screenshot of the ending narration from Kirby & The Amazing Mirror.

Kirby & The Amazing Mirror has text narration present in both the intro and ending cutscenes. The dialogue is similar in style and function to that of Kirby: Nightmare in Dream Land.

Kirby: Canvas Curse features narration for its opening and ending cutscenes. Uniquely, the narrator specifically refers to the player in both scenes as having taken direct part in the story by wielding the Magical Paintbrush. The ending narration only applies to the main game ending with Kirby, and does not occur for any of the other character endings.

Kirby: Squeak Squad features five cutscenes, which each have a set of narration. In all, the game's story is wordy compared to previous entries, with much of the narration focusing on Kirby's desire to recover his lost Strawberry Shortcake slice.

All of the cutscenes in Kirby's Epic Yarn/Kirby's Extra Epic Yarn have narration provided with a voice-over; a rarity for the Kirby series.

Kirby's Epic Yarn features full narration for every cutscene in the game. For the first (and so far only) time in the series, the narration is fully voiced, with different narrators depending on the language version as follows:

Kirby's Extra Epic Yarn features all of the same cutscenes as the original, with no changes to the dialogue and no additions.

Kirby Mass Attack features six main cutscenes which each have a set of narration. Unlike previous scenes in Kirby games, the narration text advances only upon player input.

Screenshot from the ending narration for Kirby: Triple Deluxe.

Most of the cutscenes in Kirby: Triple Deluxe have no narration, and what dialogue that exists comes directly from the characters. However, the ending scene does feature a small amount of external text narration, which kicks in shortly after Taranza rescues King Dedede from falling.

Team Kirby Clash Deluxe features a number of simple cutscenes, each peppered with a small amount of text narration. These play at certain milestones in the game, and cannot be revisited unless the game is reset.

Much like its predecessor, Super Kirby Clash features simple cutscenes with small amounts of text narration. These play at certain milestones in the game, and (excepting the final scene) cannot be revisited unless the game is reset.

Kirby Fighters 2 features narration in the Story Mode: The Destined Rivals game mode. These bits of narration are similar to those found in Super Kirby Clash, and (excepting the intro), are shown at the end of chapters.

For the sake of completion, the following list shows each game which either lacks an external narration in cutscenes, or lacks any sort of cutscene dialogue whatsoever: