Happy New Year, WiKirby! As part of WiKirby's New Years Resolution, all images that are known to be unsourced or improperly-sourced have been removed from mainspace and either deleted or archived. We will not be using such images on the wiki going forward! This has left a few small holes in our galleries in places, which you are more than free to replace if you find a properly-sourced version of what was removed. Please remember that we do not accept uploads that come from the Kirby Wiki on Fandom, or any other such wiki. Thank you, and here's to another great year! 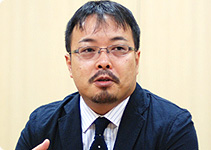 Tadashi Ikegami (池上正 Ikegami Tadashi, born 1968) is a Japanese video game composer who works for HAL Laboratory. Ikegami is one of HAL Laboratory's veteran composers, along with Jun Ishikawa and Hirokazu Ando, who have worked on the Kirby series. After being involved in in Kirby's Epic Yarn, he has been primarily in a management position; he is credited in the "special thanks" section of most modern Kirby games. He also plays saxophone, though he usually only does so in bonus arrangements outside of the games.

The following are all Kirby songs Tadashi Ikegami has been credited for being in charge of: