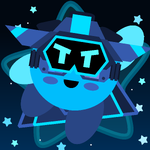 Adventurer beyond the stars!

You have arrived at Cyon's WiKirby Domain! Get to know the part-time azure puffball who's just as good as Kirby is!

Long ago, the researchers of a newer intergalactic branch of Lab Discovera have managed to obtain research info on the hero of Popstar tagged as ID-K92. With the intent of creating powerful Star Warriors that can reach the same capabilities as Kirby, the researchers used all the gathered information (including his DNA) to create several Kirby clones, including one particular azure puffball tagged as ID-X72.

But one day, a containment breach incident happened within Newer Lab Discovera, causing many currently-researched specimen, including the Kirby clones, to run amok. ID-X72 has escaped containment, and he was among the last on the run. In an attempt to escape, ID-X72 could not fly, but he has inhaled a spare jet engine within the storage area to get the Jet copy ability. As he was a near-complete clone, he could not discard it, but using his Jet powers, he managed to boost himself out of the researchers' reach until he reached a nearby computer terminal.

This computer terminal, connected to the web services of the realm of Gaia (or Earth), was used as ID-X72's method of escape from the researchers. Through the terminal, he eventually disappeared into the depths of the Cyber World, aka. the Internet.

Nowadays, ID-X72 has found a new home, and has decided to name himself as EleCyon, or Cyon, the latter reflecting more on his blue coloration. And he is now making friends with his new buddies at r/kirby and WiKirby, contributing for the better of both communities and fighting off any bad guys along the way, as the original Kirby was meant to do.

Cyon is described with he/him pronouns, and his appearance is analogous to that of the Ocean Spray Paint. He dons a special pair of goggles with a cybernetic eye that enhances vision and allows for displaying information on the fly. He is permanently equipped with the Jet ability, which is helpful for his flight abilities since he cannot float unlike what Kirby does.

And a lot more. Just feel free to ask me! Anyways, welcome to my userpage, and I hope you're having a nice day.

This section is still under construction. Listed in chronological order of buying them:

What games do I plan on getting next?[edit]

Not sure if I'm up to doing screenshots for the character balls, Rainbow Run, and Line Trials...

Caution: Do not take these stuff too seriously, they're just for fun

For easy access, I have some of my links to see other, well, things.

Don't take this section seriously lol, most of these are just joke trivia This trivia section may be more or less too long, but eh, I love trivia about myself.