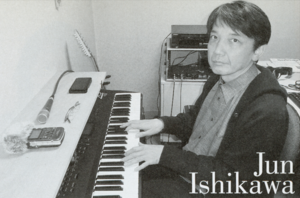 Musicians started to rely heavily on sampling and other electronic hardware in the 1980s. This is a process that started in the late '70s with samplers like the Fairlight CMI, as it was cheaper and easier than hiring live musicians. As video game sound chips evolved from procedural waveforms to sample-based playback starting in the late '80s, it became feasible for games to use these same samples. HAL Laboratory's composers have used many pieces of gear for their music since the late '80s, be it samplers, sound modules, synthesizers, or real instruments. This page documents all of the known sound gear that composers at HAL Laboratory (such as Jun Ishikawa and Hirokazu Ando) have used specifically throughout the Kirby series' music. Official sources for these are referenced if available.

"Since" is based on first recorded usage (independent of it being in a Kirby game or not).

The most well-known sound samples in the Kirby series come from Roland keyboards. These samples were first utilized in Kirby's Dream Course, but entered their most iconic form in Kirby Super Star. Many of these instruments were used through the '90s and beyond into the 2000s in games like Kirby 64: The Crystal Shards, Kirby: Nightmare in Dream Land, and Kirby: Squeak Squad. The last game to use these instruments exclusively was Kirby's Return to Dream Land, but they still appear in newer games. The "retro" samples used in Kirby's Return to Dream Land and subsequent games are directly taken from the SNES, N64, GBA, and DS games; they weren't re-recorded from their original hardware.

Not all sounds are directly recorded from factory sound module presets though; Jun Ishikawa is known to heavily edit presets and program his own synths occasionally (an example of this would be the analog "quack" and bass synths used since Kirby's Dream Land 3 up until the DS games), and many composers play live instruments on their tracks. Hirokazu Ando plays ukulele, bass, and melodica; Shogo Sakai plays guitar, and even sampled his own playing for sequence-based games like Mother 3 and Kirby Mass Attack; Megumi Ohara plays flute; Yuuta Ogasawara plays drums and guitar. Jun Ishikawa also sampled guitar feedback for "Studying the Power Plant" using an electric guitar and his own reading glasses.

Sound samples recorded from HAL's sound equipment have been utilized by other composers, as well. HAL and Dice co-developed the game Vegas Stakes, and several classic HAL Laboratory sound samples were used in that game, but the story doesn't end there: Othello World, a game only developed by Dice (no involvement from HAL), also uses many samples from HAL (that were also used in Kirby games), which were most likely taken from their Vegas Stakes development branch. As another example, due to HAL co-developing Kirby & The Amazing Mirror alongside Dimps and Flagship, numerous samples from that game ended up in games developed by Dimps that had no involvement with HAL — such as Dragon Ball: Advanced Adventure, which uses many Kirby samples (even ones that were originally lifted from Kirby 64: The Crystal Shards).

HAL Laboratory composers didn't rely completely on their own samples either; when the SNES came out, Nintendo provided a Software Development Kit (SDK) to developers. In this kit there was a collection of sound samples recorded by in-house Nintendo composers for other composers and sound programmers to use, thus many SNES games (especially early ones) from different companies used them. Hal's Hole in One Golf relied completely on these samples. Alcahest and Kirby Super Star's string hit sample (used in Arena Showdown in the latter) comes from this SDK, and it can also be heard in the SNES port of SimCity, in Mario Paint and in the SNES port of Gradius III. As another example, the bongo used in Kirby's Dream Land 3's Cast Montage song also comes from it and is also heard in EarthBound and Terranigma.

"Classic Era" refers to games that used sound samples and sequenced music stored in their files, a few of these samples have become famous in popular media and among the video game music scene for providing the characteristic "Kirby sound palette":

This sample is commonly called SARARR or ARR1, and it's as old as 1979, originating in the Fairlight CMI factory library and then being borrowed by Roland. It's notable for being heavily used by Jun Ishikawa in almost every Kirby game he has composed for (with its first usage actually being in Alcahest). This sample is a staple of '80s music and was really popular among musicians. A few common examples of it in pop culture are Jean-Michel Jarre's "Zoolook", Tears For Fears's "Shout", and Art of Noise's "Moments in Love".
An example of the Kirby sample being used in popular media would be in Kero Kero Bonito's "Flamingo".

This panflute preset was edited by Jun Ishikawa to remove the pitch envelope at the beginning, and he commonly used it in the 90s, starting with Arcana and lastly in Kirby's Dream Land 3. This one is also famous (more specifically, the PCM sample at the beginning is, as the rest is synthesized) in pop culture, as it was also part of the Fairlight CMI factory library, with its original name being "SWANEE" (although Roland calls it "Steamer"). A common and noticeable example of it in pop culture would be its usage in the Rugrats theme song.

This percussion kit was prominently used by HAL in the NES games they developed in the 90s, noticeably Adventures of Lolo III, Uchuu Keibitai SDF, New Ghostbusters II, and most importantly, Kirby's Adventure. It was used one last time in Arcana.

Another percussion kit. This is probably the most well known one, as it's the source for the many percussion sounds used in Kirby games since the '90s. The TR-like electric snare sample was used for the first time in Vegas Stakes, but the whole percussion kit was used heavily on the SNES version of Wario's Woods's soundtrack, due to Tadashi Ikegami and Hiroaki Suga composing and arranging it.

Another very famous sound. Originating in Roland's D-50 synthesizer, this sound became another staple of '80s and early '90s music, and numerous other sound companies tried to imitate it. Jun Ishikawa used this sound for the first time in "Milky Way Wishes", and is the only usage it was given in Kirby Super Star. Nonetheless, it was heavily used throughout Kirby's Dream Land 3's soundtrack. It was re-recorded and used again in the series' GBA and DS games. The SNES version of the sample made one last appearance in the Kirby's Return to Dream Land soundtrack.

Drum loops used in Kirby 64: The Crystal Shards, coming from a drum 'n' bass sample CD called Drum 'n' Bass Resonance by Ueberschall. While not used often, they are notable for providing the game's songs with a very distinctive sound palette compared to the rest of the series. The first is a 180 BPM loop that comes from track 30, "4indoorfloor"; this is used in "Boss" and "Miracle Matter", with the latter also using it at half speed. The second is a 165 BPM loop that comes from track 64, "Speedomat"; this is used in "Heading for 0²".

This preset was used heavily in all SNES Kirby games composed by Jun Ishikawa. A remarkable use of it would be the background chords of Ripple Field: Ocean Waves.
An example of the Kirby sample being used in popular media would be in Snail's House's "My Valentine".

This orchestra hit was used in Boarding the Halberd, Havoc Aboard the Halberd, throughout the Kirby 64: The Crystal Shards soundtrack and, most famously, in Masked Dedede's Theme, including its Kirby: Triple Deluxe, Kirby and the Forgotten Land and Kirby 30th Anniversary Music Festival renditions. As another interesting note, this sample was also commonly used as a sound effect in some 90s anime.

"Modern Era" refers to games that use streamed music instead of sequence files:

This preset comes from the Whole Lotta Country sample library by Sampleheads and has been used since Super Smash Bros. Melee, with its first usage in the Kirby series being in Kirby Air Ride. Only three presets have been used from this library, and this is by far the most used one, appearing in almost every Kirby game since Kirby Air Ride.

Ivory is a highly advanced and realistic grand piano sound library. It was first used in the Kirby series in 2010's Kirby's Epic Yarn, where both Tomoya Tomita and Hirokazu Ando used it.[11] Ivory has since become a signature part of Ando's composition style in modern Kirby games, thanks to his focus on acoustic, piano-focused pieces. Ando himself does not play piano, and instead programs the piano pieces heard in his music.[17]

The Suzuki Andes 25F and Suzuki Melodion are both melodicas, a type of aerophone. A melodica resembles a small keyboard, but is played by blowing into an air pipe attached to it while pressing the keys. The Andes 25F is smaller and has a sound resembling a recorder, while the Melodion is slightly bigger and has a sound resembling a harmonica. Melodicas became popular in Japanese indie music in the 90s and 2000s due to their quirky acoustic sound. They were first used by Hirokazu Ando on the "Stage Medley" track on the Kirby Ultra Super Deluxe Original Soundtrack in 2009, and have appeared in most of his work for the Kirby series since then.

The Ricoh 2A03 is the microprocessor used in the Nintendo Entertainment System game console. What makes this remarkable is that the 8-bit waveforms (pulse, triangle, noise) used in Kirby's Return to Dream Land, Kirby: Triple Deluxe and Kirby: Planet Robobot were sampled from a real NES, no VSTs were used. [18]