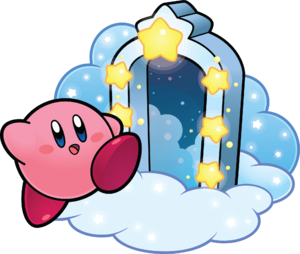 A Door (otherwise known as a Doorway) is an object that Kirby and other playable characters can use to move from one area or room to another. Doors are typically black openings marked overhead by stars and are only slightly larger than Kirby himself. Doors have appeared largely unaltered in every game in the main Kirby series, and entering one plays an iconic jingle which itself has remained constant through the entire series.

Doors operate the same way in every main series Kirby game, starting with Kirby's Dream Land. To use one, the player must press up on the + Control Pad, Control Stick, or Circle Pad while Kirby is in contact with the doorway. This will cause him to enter the door and be taken to a different area or room.

Some doorways will lead to side-areas where they can be accessed again to return to the starting point. These are referred to as round-trip doors[1], and are marked in later titles by a single small star or by red stars. Most are marked either by large stars or by a set of three, and are one-way only. Starting in Kirby's Adventure, stages that don't end in Boss fights instead end with a door. This door will usually have a special indicator, such as much larger stars, or a golden frame. Doors are also typically seen in world hubs as the entrance to stages, and are specially marked as such. Doors can also be made to appear or disappear by pressing Switches, defeating enemies, or just waiting.

Within each game's code, doors are not technically tied to the physical object, which instead is a typical sprite or model; the association between the two is largely for the player's convenience. Occasionally, doors can be replaced with a different object, such as a more elaborate entrance. They can be obscured, hidden behind objects, or even invisible, as well. Hidden doors are marked by peculiarities in the background, requiring an attentive eye, and usually lead to secret areas, including item caches and HAL Rooms. A famous example of a hidden door involves floating up to the moon at the top of Bubbly Clouds to access a secret room filled with bonus items, which has become a recurring secret through the series.

Notably, there are no "traditional" doors within Kirby 64: The Crystal Shards; Kirby typically enters new areas by walking into aesthetic doors that exist within the environment, or simply walking, flying, or diving off-screen into the next room. A similar approach is taken for Kirby and the Forgotten Land, due to the more open-ended design of the 3D spaces, though the traditional star-marked doors still occasionally appear. Warp Stars inherit some of doors' previous functions, including how red stars designate a "round-trip".

There have been many variants of doors throughout the series, though most tend to be purely aesthetic, such as the doors leading to boss encounters in later entries. Some however can serve as barriers unless specific criteria are met: