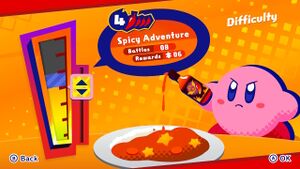 Files are useful for spicing up articles, and no good article is complete without them. However, there are a few rules in place for how files should be added to articles. The following is WiKirby's file use policy.

Adding a file to an article can cause a lot of things to be pushed around. As such, it is highly recommended that the editor preview their work before saving and, if necessary, stretch and shrink the browser window to see how text, files, and other widgets bend around each-other at various display levels. Keeping the article format neat and tidy without too much white space or clutter is just as important as the content itself, if not more important in some cases. 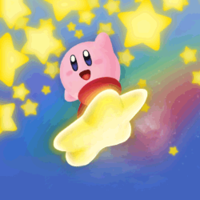 This is an image example.

There are several piped statements which can be added to an image's coding to manipulate it. Here is an example of an image using several of these:

[[File:filename.png|right|thumb|200px|This is an image example.]]

Any or all of these can be used, and they need not be in this order.

Uncontained files are those which do not utilize the "thumb" parameter, and thus cannot have captions. They look like so: 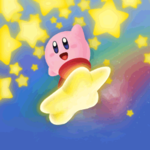 Files without framing are useful for filling tables and infoboxes, but should generally be avoided in the main article space. Exceptions are typically made for small sprite images that do not push text around very much. If a file is being placed in main article space and matches either of the following criteria, it should be contained in some fashion:

This is an image caption.

To create a contained image, add the "thumb" statement to the file, such that the previous image example becomes like so:

When containing a file using the "thumb" syntax, an image caption must be used to describe the image. The caption itself should generally be a short sentence describing what the picture is depicting and/or where it came from.

In some cases, an editor may wish to display two or more images together for direct comparison or for sequential purposes. This can be done using the Multiple image template. When using this template, the editor can specify the combined width of the image template, the direction in which they are lain, and a caption to describe them all. The editor should be clear which image is being talked about in the caption, using qualifiers such as (left), (right), etc.

When dealing with a transparent image, it may be preferable to display them in a special way. To do this, the editor can use the ImCap template. This template allows an image to be displayed as if it were uncontained, but add a caption beneath it. Such an image may resemble the following:

Using these is a cosmetic choice and is not compulsory for transparent images. It should be noted that the caption width should not be less than the image size, or display problems will occur.

Galleries are an excellent way to contain lots of images in a presentable manner. They are exceedingly simple to use and automatically resize images to a pre-determined width and/or height. the following is an example of a gallery:

Note that all that is needed for each image is the file name (with the File: prefix unnecessary) and a caption. Like before, captions should be relatively short, or else they may cause the gallery's rows to become unevenly spaced.

When inserting audio into a page, it should be contained within a "thumb" container unless it is being inserted directly into a table or infobox. All audio clips should have a caption explaining what the audio is and where it is from, along with notes on whether or not it has been truncated in accordance with audio policy. Audio may also be inserted into galleries, but audio clips should not be mixed up with images.