Hi, I like Kirby, and I like consistent information, thus I like to make people have consistent info about Kirby.
You will see me mostly adding certain specific things of a certain game, but you will also see me putting files around, and maybe writing some articles and stuff.
My native idiom is Spanish, so you will see me around Names in Other Languages Spanish things and such. I am not perfect with English, so you may see me doing some grammar mistakes on that side. :D

Here is/will be my first table that I probably make/made from scratch.
As you can see this will cover which Kirby games I have completed and such.
but later

Archive of things to have in mind[edit]

A list of notes about wiki editing, consisting of either mistakes that I made before to prevent me of doing them again, or things that certain people have noted somewhere, while not necessarily correcting an error of mine. I would recommend you checking this, mostly if you aren't so fond with WiKirby's way of doing certain things and/or you aren't so fond with some English grammar specifics.
There are a lot of things that people have noted that I haven't put here. I will try to make this a long list of specifications to have them somewhere. I will be updating this later.

A lists of things that I want to do. If you are searching for something to do, and are evading the existence of Maintenance, know that help with any of this is appreciated ;)

Insert images on the respective pages[edit]

There are some "groups of images" that feature a lot of images of characters or items, but those images aren't in the page of the respective characters of items. So the point is including every of the next images on the pages of the things that they represent (for example the Qbby sticker is already on the Qbby page, so the point is doing that with every image.): 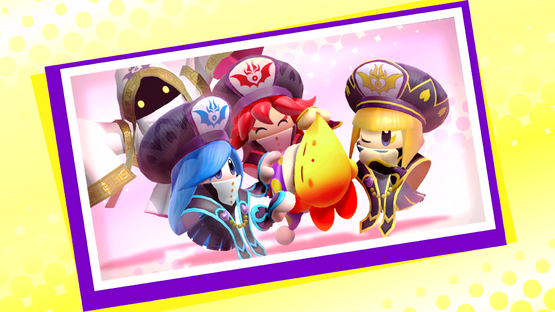 Links that are useful. Yeah that. You may want to read them.

This is your reminder to Sleep Well and Drink Water