The Mole Monster[Japanese title] is a large mole-like creature that appears as a monster in the Kirby: Right Back at Ya! episode Buccaneer Birdy. It is summoned by King Dedede from Night Mare Enterprises in order to buy him time to get away with a pirates' treasure chest. This plan nearly succeeds, but King Dedede ends up losing the treasure anyway, and the Mole Monster is defeated by Mirror Kirby.

The Mole Monster is a tall brown-furred mole-like creature capable of standing on its hind legs. Its face consists of a robotic visor with an attached lamp and a large drill bit for a snout. Its hands and feet are braced with metal plates, and its claws are also metallic.

The Mole Monster has the ability to dive and dig through the ground at a rapid pace, using its drill and claws to make its way through the soil. It attacks by swiping its claws, drilling with its drill bit, and attempting to grab its opponent and drag it underground. The Mole Monster cannot be inhaled by Kirby, and its speed makes it a dangerous opponent. 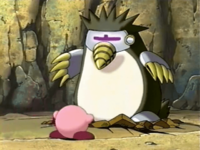 The Mole Monster confronts Kirby in the cave at the Dream Land harbor.

The Mole Monster appears through the Monster Delivery System as an advance order made by King Dedede just in case he had any trouble recovering the pirates' treasure that he and the other residents of Dream Land were seeking. The monster appears just in time to distract Kirby while King Dedede and Escargoon escape with the treasure chest, and proceeds to cause the pink puffball a good deal of trouble, nearly dragging him down into the earth.

After dealing with King Dedede, Tiff returns with the treasure chest and tosses Kirby the last piece of treasure inside - a golden hand mirror - so that he can inhale it and gain the Mirror Copy Ability. Using this ability, Kirby quickly dispatches the Mole Monster by first guarding its attacks, then making copies of himself to confuse it, then finally cleaving it in two using the Mirror Cut technique.