From WiKirby, your independent source of Kirby knowledge.
(Redirected from Kirby & the Amazing Mirror)
Jump to navigationJump to search

Kirby & The Amazing Mirror is a main-series Kirby game released for the Game Boy Advance on April 15th, 2004 in Japan, on July 2nd, 2004 in Europe, and on October 18th, 2004 in North America. It was produced by HAL Laboratory and Nintendo, and developed by Flagship. Kirby & The Amazing Mirror looks and plays much like its predecessor Kirby: Nightmare in Dream Land, but features an expansive and non-linear interconnected world with bosses that can be defeated in a number of different orders. The game also features four Kirbys of various color which can be played by up to four different players simultaneously, making this title the first main series game which can be played with four players in the main game. The different Kirbys can wander off in separate directions and assist each-other using their Cell Phones. 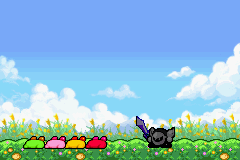 The story of Kirby & The Amazing Mirror takes place almost entirely within a parallel world connected to Dream Land called the Mirror World, which is a parallel universe filled with mirrors said to be able to grant wishes made in their reflection.[1] One day, the mirrors of this world start to change, creating only sinister reflections. Meta Knight decides to investigate by heading into the Mirror World through the mirror gateway hanging in the skies above Dream Land. After some time, Kirby takes a stroll near this mirror - apparently minding his own business - when he is suddenly attacked by a dimly-hued Meta Knight and split into four copies of himself in a single slash, differing only by body color. With this done, the shadowy warrior flies back into the mirror, and the Kirbys give chase on a Warp Star after taking a moment to collect themselves. 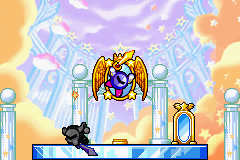 After entering the Mirror World and briefly venturing through a cloudscape, the Kirbys stumble upon a grand coliseum, where they find two Meta Knights battling in front of another great mirror, with one of the two knights being the dim one from earlier. This darker Meta Knight beats his twin and banishes him inside the mirror, then breaks the mirror into eight pieces and scatters them across the land before departing. Shortly thereafter, a dark duplicate of Kirby can be seen skulking away from the scene. The Kirbys follow this shadowy figure through a mirror to the right, and proceed to explore the world in search of the lost fragments of the great Dimension Mirror.

As the Kirbys explore this unfamiliar world, they repeatedly encounter the dark doppelganger Kirby, who often appears out of nowhere and sometimes attacks them, but mostly just stops to stare. If the Kirbys attack him first, he runs away quickly, dropping a helpful item. Each of the lands surrounding the central one of Rainbow Route is home to a keeper of one of the shattered mirror pieces, who the Kirbys must defeat. One of these shard holders is the Meta Knight duplicate who broke the mirror in the first place, and at this point, his lack of honor in battle should be a clue that he is not the real masked swordsman. After all the mirror shards are restored, the Kirbys are able to enter the mirror and face the evil corrupting it. 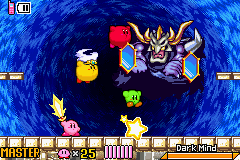 Upon entering the mirror, the Kirbys find themselves in a twisted alternate version of the coliseum, where they run into both Meta Knights. The real one points the Kirbys to his evil twin, who is finally revealed as Dark Meta Knight. After battling this foe one more time, Dark Meta Knight shatters into glass upon being defeated, and a portal appears in the sky which the Kirbys jump into. Meta Knight throws his sword into the portal to aid them against the evil that was responsible for this whole affair: an armored wizard-like figure named Dark Mind. After several battles against this foe, he casts off his humanoid form to reveal himself as a giant flaming eyeball similar in appearance to Dark Matter and its relatives. One more tough battle ensues, and once enough damage is dealt to Dark Mind, he begins to shrink and tries to get away, but the Kirbys chase him down on their Warp Stars and defeat him with volleys of Star Bullets.

After Dark Mind is destroyed for good, the Kirbys begin to fly home. As they travel, they are joined by Shadow Kirby one more time, riding his own Warp Star. It is revealed that this seemingly malevolent copy of Kirby was in fact the shy and reclusive original protector of the Mirror World, and he thanks the Kirbys for ridding the Mirror World of Dark Mind. From here, the Kirbys fly back through the mirror into Dream Land and Meta Knight follows them, leaving his sword in a pedestal in the coliseum.

Kirby & The Amazing Mirror is a two-dimensional side-scrolling platform adventure game, with physics, assets, and graphics borrowed from its predecessor, Kirby: Nightmare in Dream Land. As such, it features most of the same enemies, moves, and Copy Abilities from the previous game. However, the premise and layout of Kirby & The Amazing Mirror differ greatly from its predecessors and subsequent titles. The most notable change is to the world itself, which is no longer traversed in a series of levels and isolated linear stages. Instead, all nine major areas of the Mirror World are interlinked and transition into each other in a similar vein to the Metroid games, allowing Kirby to pick his own path through the world for the most part. As such, a map of the world and each area can be found inside Treasure Chests which can be used to navigate the world and observe how each individual room is connected to others around it. In the center of the world is the Central Circle in Rainbow Route, where Kirby starts his exploration and where he returns to whenever the game is reset, he completes a Goal Game, defeats a Boss, or uses his Cell Phone to return. As various Big Switches are pressed in the Mirror World, Mirror Doors link back to the central circle which allows Kirby to quickly return to areas he has already visited.

The second main feature of Kirby & The Amazing Mirror is the four-player co-op system. By linking up to four Game Boy Advance systems together, players can simultaneously play as each of the four Kirbys and explore the world entirely on their own terms and in completely separate directions. Using the Cell Phone will allow the Kirbys to call each-other and warp to each-others' positions, though this requires Battery power. While cooperation in this way is not necessary to obtain 100% completion, it can make a lot of the fights and puzzles easier. This multi-player extends to each of the Sub-Games as well, which can all be played with up to four players. Any Kirbys which are not controlled by a player will instead be controlled by the CPU.

Throughout the Mirror World, Kirby can find a number of optional goodies inside of treasure chests, including a Sound Player and note sheets, Spray Paint, Vitalities, and the aforementioned area maps, along with more minor and conventional items. While these items are not necessary to complete the game, every single treasure chest must be opened to attain 100% completion.

The game consists of a total of ten areas, most of which contain a boss that holds a Mirror Shard. Unlike in many other games in the series, Kirby does not need to visit the majority of these in a set order but may tackle them in any sequence he wishes, provided he locates their entrances, which are sometimes hidden. 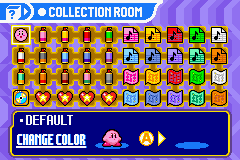 Screenshot of the completed Collection Room.

During his journey, Kirby may encounter various useful items, which can usually either be seen laying on the ground or inside treasure chests, though some may also be dropped by regular enemies. Some items are more permanent and come in limited numbers; these can be viewed in the Collection Room once obtained. When Kirby calls his CPU clones, they may also bring him minor items such as food.

As in other Kirby games, many varieties of enemies appear in Kirby & The Amazing Mirror, most of which can be inhaled and many of which grant Kirby a Copy Ability. In addition to regular enemies, this game introduces enemies that are bigger than usual; these take considerably longer to inhale and usually possess a large amount of health. In turn, spitting out a large enemy creates a penetrating Star Bullet on its own.

In Kirby & The Amazing Mirror, Kirby needs to locate and defeat a boss in nearly every area, excluding Rainbow Route, in order to acquire the mirror shards that eventually grant him access to the final boss fights. Bosses can never be inhaled and do not possess abilities (though their projectiles may), but many of them are able to summon enemies that may yield one.

The following is a list of staff who have worked on Kirby & The Amazing Mirror: 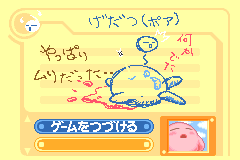