This article is about the monster in Kirby: Right Back at Ya!. For the Copy Ability, see Ghost. For the enemy in Kirby Battle Royale, see Ghost (enemy).

Ghost Monster[Japanese title] is a monster which appears in the episode Escargoon Squad from Kirby: Right Back at Ya!. It is an ethereal creature capable of flying through the air and passing through solid objects, and serves as a collector of overdue payment for Night Mare Enterprises. It is one of the few monsters in the series which does not battle Kirby and is not defeated.

The Ghost Monster is a small pale ethereal creature which is translucent. It is defined by its long textureless robe which covers its body and leaves a long comet-like tail behind as the monster moves about. The Ghost Monster is capable of speech, and is able to fly rapidly through the air. It can also pass through solid objects, but is capable of grabbing objects as well.

It is unclear what the Ghost Monster's offensive capabilities or weaknesses are, since it does not fight anyone, nor is it defeated by anyone. 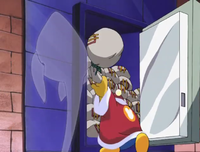 King Dedede pays out the Ghost Monster in exchange for being left in peace.

In this episode, the Ghost Monster is sent by Night Mare Enterprises to Dream Land in order to scare King Dedede into paying his overdue bill to the company. Coincidentally, this haunting coincides with Escargoon's own plot to pull a prank on King Dedede by dressing up Kirby and Fololo & Falala as ghosts themselves. Escargoon is unaware that there is a real ghost after King Dedede until after the prank is exposed. From there, the Ghost Monster successfully terrifies King Dedede into opening his personal safe and paying the monster to leave, which it promptly does through the Monster Delivery System after receiving a sack of coins.