Kirby and the Forgotten Land

Kirby and the Forgotten Land is an upcoming main-series Kirby game for the Nintendo Switch, set to be released on March 25th, 2022. It is the first main-series title to take place in a 3D environment rather than a linear side-scrolling 2D space. The game was announced in the Nintendo Direct on September 23rd, 2021.[2]

Kirby and the Forgotten Land takes place on a mysterious world different from Popstar. While flying through the skies of Dream Land on a Warp Star, Kirby is sucked into a star-shaped rift (similar to those from Another Dimension) and washes up on the shores of an abandoned land, filled with decaying structures from an ancient civilization. The world, described as a "mix of civilization and nature",[3] is populated with many creatures both familiar and new. Kirby befriends a sprite-like creature named Elfilin, who accompanies him on his journey though the new world. While he explores the area, Kirby finds and frees Waddle Dees, who have been trapped in cages by the Beast Pack.[1][4] The main objective of the game is to save kidnapped creatures from evil forces,[5] although it is currently unclear if only Waddle Dees were kidnapped. As Kirby frees them, they appear to populate an area in the town that serves as a rest stop for Kirby and his friends. 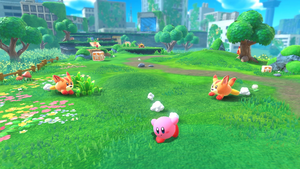 Kirby and the Forgotten Land is the first mainline Kirby game to take place in a 3D setting, albeit with Kirby having much of the same moveset as in the 2D games. He can walk, dash, and jump to move around each level. He can hover as always, but it appears to have a limited height in this game, unlike the unlimited height seen in 2D titles. Kirby can also guard against incoming attacks and dodge out of harm's way. Lastly, he keeps his trademark ability to inhale objects, including larger ones, and spit them out as projectiles. It seems that Star Bullets do not appear in this game, and Kirby instead spits out objects as-is, much like in Kirby 64: The Crystal Shards. The familiar Copy Abilities also return, now with expanded attacks that take advantage of the third dimension. Some allow Kirby to use targeting for ranged firing.[5] A second player can join the game and play as Bandana Waddle Dee, who utilizes his spear as his main form of attack.

The game does not appear to be an open-world game, as it is said in official sources that Kirby runs through stages as he looks for goals.[6][7][8] However, details about how the game is exactly structured are currently unknown. Screenshots from the level hub show that there is a counter representing the total number of Waddle Dees that Kirby has saved. Collectibles along the way include food and capsule toys, as well as new objects of unknown purpose, such as coins with a design similar to Score Coins (that can be found out in the open, by defeating enemies, and by solving puzzles) and green diamonds. Stages are much more open-ended than in previous installments, and doors appear to be fewer in number. A golden cage serves as the goal for each stage, while additional cages can be found by exploring further.

Kirby and his new friend Elfilin in Waddle Dee Town.

In-between playing through stages, Kirby has a hub area to return to called Waddle Dee Town. Here, he can get tips from the Wise Waddle Dee, play Sub-Games with the other Waddle Dee inhabitants, and collect capsule figurines from a dispenser. The town grows and gains more features as more Waddle Dees are rescued. Stages themselves are visited via a level hub where Kirby flies to each area on a Warp Star, similar to the level hubs for World of Miracles - Planet Popstar and Far-Flung Starlight Heroes in Kirby Star Allies. Unlike those previous examples, the level hub in Kirby and the Forgotten Land appears to be more expansive and continuous.

Screenshot showing one of Needle Kirby's new moves which takes advantage of the 3-D space.

The following Copy Abilities have been revealed:[2][1] 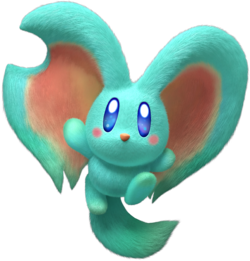 The following characters have been revealed:[2][9]

Kirby avoiding one of the game's new enemies while traversing a beachside.

The following enemies have been revealed:[2]

The following Bosses have been revealed:[11]