a Kirby encyclopedia that anyone can edit, currently with 3,744 articles and counting! 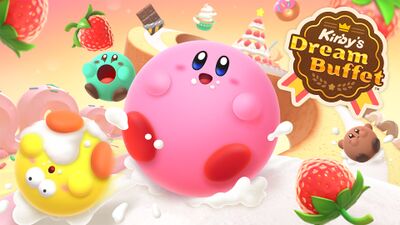 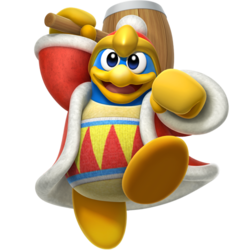 King Dedede (King DeDeDe in some older games; sometimes shortened to Dedede) is a portly, blue, penguin-like creature who wields a hammer and proclaims himself king of Dream Land. He is a recurring character who serves as Kirby's "arch frenemy" and is usually fought as a boss. Though he often engages in trouble-making, mostly involving stealing other people's food, he has performed noble deeds as well, such as trying to seal away Nightmare, helping Kirby battle Queen Sectonia, and accompanying Kirby in several of his adventures. Because of this, he is considered a protagonist, despite his greediness and egotism. King Dedede lives in a castle atop a mountain with a retinue of Waddle Dees acting as his servants.

Having debuted in the series' first installment, Kirby's Dream Land, King Dedede is arguably the most recognizable character from the Kirby series behind the pink hero himself. He is often portrayed as a comic foil to Kirby, especially in spin-off titles, which makes him comparable to Bowser from the Mario franchise, though King Dedede is not nearly as villainous. He has appeared in one form or another in nearly every game in the series, and he even stars in his own side game, Dedede's Drum Dash Deluxe. In older games, he was seldom playable, but this changed starting with Kirby 64: The Crystal Shards, with the king being playable in many of his subsequent appearances. 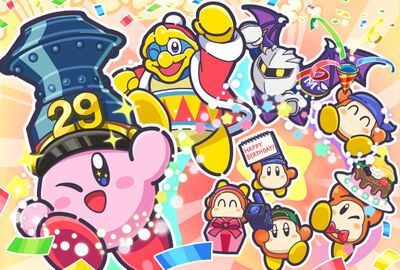 This week's featured picture is the illustration posted on the Kirby JP Twitter to commemorate Kirby turning 29.

Today's video features the battle between Kirby and Miracle Matter in Kirby 64: The Crystal Shards!