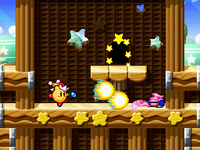 These are the thirteen main platformers in the Kirby series, with each game's Japanese, Chinese and Korean title beginning with 星のカービィ / 星之卡比 / 별의 커비 (Hoshi no Kābyi/xīng zhī kǎ bǐ/byeol-ui keobi, "Kirby of the Stars"). The games feature Kirby's signature inhale, as well as his Copy Ability (with one exception).[1][2][3] These games are also all assumed to be canon.